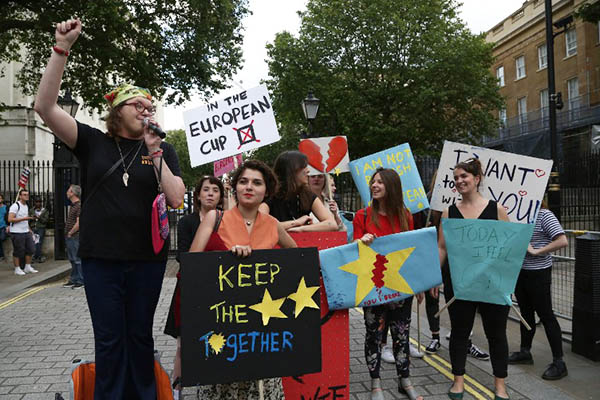 The Donald Trump administration would be committing “sheer folly” if it supports the European Union’s breakup, as it appears to be doing, the departing U.S. ambassador to the E.U. warned on Friday.

Anthony Gardner, who is leaving his Brussels post after three years, said the U.S. president-elect’s transition team had been asking E.U. officials which countries will follow Britain in voting to leave the 28-nation bloc. “To think that by supporting fragmentation of Europe we would be advancing our interests would be sheer folly. It’s lunacy,” Gardner told reporters in unusually tough on-the-record remarks at the U.S. embassy in the Belgian capital.

Warning that E.U. fragmentation would hurt U.S. business interests in particular, he said U.S. support for a hard Brexit, or a complete break from the E.U. single market, would also be “the height of folly.”

Leading Brexit campaigner Nigel Farage was the first British politician to meet Trump following the New York real estate tycoon’s shock election victory in November, and has been back for a second visit.

French far-right presidential candidate Marine Le Pen, who has threatened a so-called “Frexit,” was seen at Trump Tower in New York on Thursday although officials said she did not meet the president-elect or any of his staff.

Gardner said he had heard that members of the Trump transition team had “made phone calls to E.U. institutions” asking if more countries would leave the union. “That was the one question that was asked, basically what is the next country to leave, which is kind of suggesting the place is about to fall apart,” Gardner said. “It’s a perception that Nigel Farage is presumably disseminating in Washington. And it’s a caricature,” he added.

Gardner, a former private equity head in London appointed by President Barack Obama in 2013, said U.S. policy for 50 years has backed E.U. integration because it benefits both sides for political, economic and security reasons.

Trump’s administration would be taking a “flawed approach” if it pursues only ties with perceived best friends like Britain and Germany on the “false assumption” that the bloc is dysfunctional and does not deliver. “I believe some hold that view,” he added, but despite a range of crises besetting the bloc, “the E.U. … is not about to fall apart.”

Gardner also hoped Trump, who has been seen as cozying up to Russian President Vladimir Putin, would stay tough on the U.S.-E.U. sanctions imposed on Moscow since its 2014 annexation of Crimea from Ukraine. “It would be inconceivable and shameful if we were to consider lightening sanctions on Russia,” Gardner said, citing U.S≥ intelligence claims of Russia’s meddling in the U.S. elections.

Gardner criticized the Trump team for having ordered politically appointed ambassadors and other personnel to leave their posts on the Jan. 20 inauguration day rather than give them the usual weeks or months to organize their departures. “That is a breach of precedent established over decades,” he said. He said he plans to speak out publicly about his concerns about populist threats to human rights and the rule of law as he stays on in Europe as a private citizen.