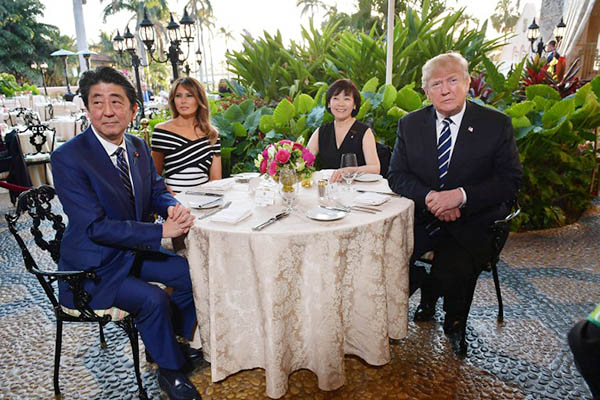 U.S. president claims he has given his ‘blessing’ for peace talks to formally end the Korean War

U.S. President Donald Trump on Tuesday confirmed direct contacts between the United States and North Korea and gave his blessing to talks aimed at formally ending the Korean War in a series of diplomatic revelations.

Raising expectations for a major breakthrough at a series of upcoming summits, Trump said “a great chance to solve a world problem” was within reach on the Korean peninsula.

Side-by-side with Japanese Prime Minster Shinzo Abe at Trump’s Palm Beach, Florida resort, the U.S. president said that a rare inter-Korean summit in 10 days time could, with his “blessing,” discuss an elusive peace treaty to formally close the 1950-53 conflict, which concluded with an armistice. “People don’t realize the Korean War has not ended. It’s going on right now. And they are discussing an end to the war,” he said. “Subject to a deal they have my blessing and they do have my blessing to discuss that.”

Trump and North Korean leader Kim Jong-Un have not spoken directly, the White House said, but the U.S. president confirmed that Washington and Pyongyang had been in contact at “very high levels” to prepare for a historic meeting between them.

The Washington Post reported that CIA director Mike Pompeo had met Kim on a secret trip to the North over the first weekend of April, shortly after he was nominated to be secretary of state. Both the White House and the CIA declined to comment on the report.

“Five locations” were being considered for the summit with Kim, Trump said. “That will be taking place probably in early June or before that assuming things go well. Its possible things won’t go well and we won’t have the meetings and we’ll just continue to go on this very strong path we have taken.”

Officials say that no decision has yet been made on a meeting venue, but China, North Korea, South Korea, and Panmunjom in the Demilitarized Zone between the two Koreas are seen as possible locations.

Panmunjom was the site of the signing of the 1953 armistice and will be the location of the April 27 summit between Kim and South Korea’s President Moon Jae-in.

Officials from the two Koreas were to meet on Wednesday in preparation, after Seoul’s culture minister—who sat next to Kim at a K-pop concert in Pyongyang earlier this month—said on Tuesday that Seoul “thinks that the inter-Korean summit should lead to the signing of a peace treaty.”

The U.S.-led United Nations command, China and North Korea are signatories to the half-century-old armistice, but most experts agree South Korea would likely have to sign any successor agreement—which could need extensive negotiations.

Trump’s announcements somewhat overshadowed bilateral talks with his golfing buddy Abe, in which both leaders were eager to iron out differences on trade and display a united front on North Korea. “Donald, you have demonstrated your unwavering determination,” Abe said, effusively praising Trump’s handling of the North Korea crisis.

He thanked Trump for agreeing to bring up the issue of Japanese abductees taken to North Korea, a major domestic issue. “This reflects your deep understanding for how Japan cares about this abduction issues. I am very grateful for your commitment.”

Last year, Trump and Abe traded fist bumps and high fives as they snuck in a round of golf in Palm Beach and a return leg near Tokyo, tucking into burgers with ketchup for good measure. The two leaders have a chunk of time free on Wednesday and Trump indicated they would try to play 18 holes.

“This is a very important meeting, a lot of really key issues are on the line,” said Larry Kudlow, Trump’s top economic adviser. But with Abe’s approval rating languishing at its lowest level in years and Trump mired in controversies and crises too numerous to list, both are under domestic pressure.

Trump could do with a political victory—perhaps in the form of opening up trade negotiations with Japan—as he seeks to calm an increasingly restless and crisis-weary base. Amid the tumult, Trump has taken a harder line on his promise to rewrite the global terms of trade in America’s favor.

Trump has announced tariffs on billions of dollars of Chinese imports, hit out at what he called European Union protectionism and warned he may walk away from a longstanding trade deal with Mexico and Canada.

Abe was cautious on trade ahead of the talks, saying only that he would “exchange opinions based on our shared understanding that Japan and the United States will lead the economic growth of the Indo-Pacific region through free and fair trade.”

So far Trump has proven flexible about Abe’s reluctance to begin negotiations on a free trade agreement. But Japan’s protectionist agriculture and auto markets could well be Trump’s next target, unless Abe can use his friendship to tee-up a compromise.