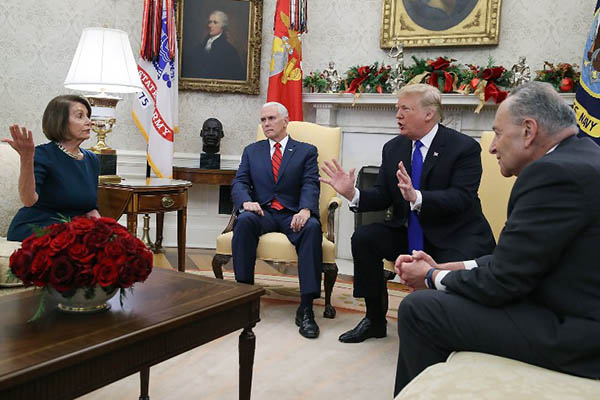 U.S. president says he will ‘proudly’ shut down the government if Congress refuses to approve $5 billion for building Mexico border wall

An angry Donald Trump told Democratic leaders at the White House on Tuesday that he will shut down the U.S. government because they refuse to approve billions of dollars in funding for his controversial Mexico border wall.

The president and top opposition congressional leaders had been meant to hold a reassuring Oval Office photo-op. Instead, their blazing row in front of the world’s media gave a preview of the stormy future facing Trump as legal scandals mount and his Republican party gives up its once total control of Congress.

Chuck Schumer, the senior Democrat in the still Republican-dominated Senate, and Nancy Pelosi, who is likely to become speaker in the newly Democrat-controlled House of Representatives in January, bluntly told Trump that he had no chance of getting the $5 billion he wants for the wall.

Schumer objected, while Pelosi suggested that the debate shouldn’t take place in front of journalists. But Trump, whose U.S.-Mexico wall idea was at the center of his surprise 2016 election victory, could not control his irritation. Taking out two memo cards, he read off figures that he said showed a near end to illegal immigration at portions of the border already featuring high fences. “It’s been very effective,” he said.

Pelosi parried that the statistics were incorrect. “What the president is representing [with] his cards over there, are not facts. We have to have an evidence-based conversation about what does work and what money has been spent and how effective it is,” Pelosi said.

Outside the White House afterwards, Schumer was even more scathing about Trump. “This temper tantrum that he seems to throw will not get him his wall and it will hurt a lot of people,” he said.

Pelosi was quoted by U.S. media as telling fellow Democrats in Congress that Trump’s wall push was “like a manhood thing for him, as if manhood could ever be associated with him.” But Trump later played down the scene, saying the meeting had been “very friendly” and that he “respects them both.”

Tweeting ahead of the White House meeting, Trump claimed that the wall was needed to prevent “large scale crime and disease” brought by illegal immigrants.

The issue is popular with his political base, which wants radically tighter controls at the southern border, a magnet for impoverished Central Americans fleeing gang violence and seeking work in the United States. Opponents say the wall is not only a waste of money but has been used by the president to whip up xenophobia.

Trump, who leads chants of “build the wall” at campaign rallies, has been frustrated in the first two years of his administration. Now, as the government funding deadline approaches, both sides will have to decide whether to blink.

After the meeting with Pelosi and Schumer, Trump insisted that he’d hold firm. “I don’t mind owning that issue,” he said. “If we have to close down the country over border security I actually like that.”

Trump said earlier on Tuesday that he could even order the military to do the work if Congress refused to fund construction—although it was not clear that he had the authority.

Washington has been paralyzed by political gridlock for most of Trump’s two years in office and the partisan divide is set to intensify in January when Democrats take over the House majority. The power shift comes as Trump faces ever-growing peril from criminal investigations, with talk growing of possible impeachment proceedings against the president.