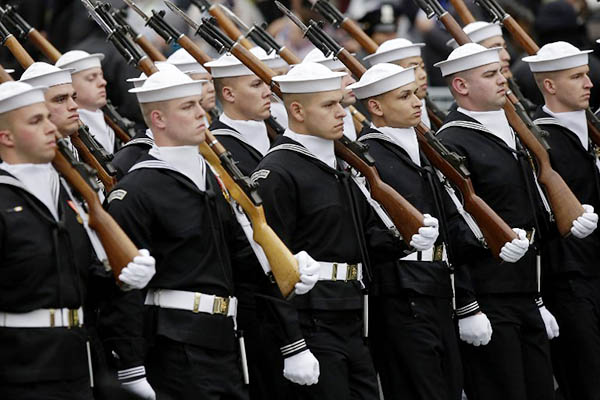 President Donald Trump will “rebuild” America’s vast military, boost its anti-missile capabilities and prioritize defeating the Islamic State group, according to the first policy statements published on the White House website on Friday.

Published moments after Trump was inaugurated president, the statements say he will end limits on Pentagon spending agreed by Congress and the Obama administration, and will soon release a new budget proposal outlining his vision for the military.

“We will provide our military leaders with the means to plan for our future defense needs,” the White House said. “We cannot allow other nations to surpass our military capability.”

The statement said the U.S. will develop a “state-of-the-art missile defense system” to defend against attacks from Iran, North Korea and others. It listed developing cyber-warfare capabilities as a key goal—an issue that gained importance after U.S. intelligence agencies said Russia interfered with the U.S. presidential election, hacking political party computers.

Some of that work is already underway.

Even if there is not a full defensive ring around the country, the United States has already deployed missiles on its West Coast designed to intercept ballistic missile fire from North Korea. Under policy set during the Obama administration, the number of those interceptors is to be increased to 44 by the end of this year.

The website also said Trump would reverse declines in the U.S. navy and air force. A program is already underway to do that in the navy. Trump “knows that our military dominance must be unquestioned,” the statement said. “The world will be more peaceful and more prosperous with a stronger and more respected America.”