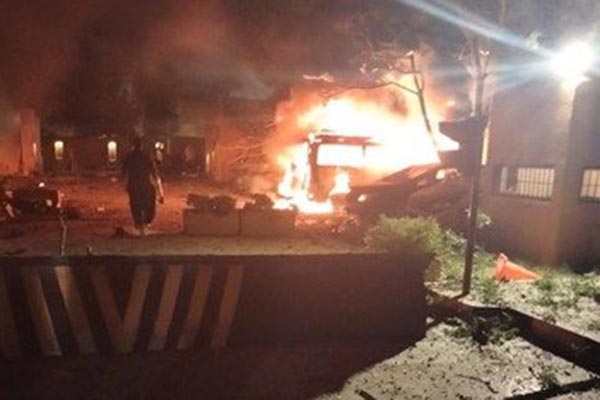 Screengrab of the aftermath of the bombing

At least four dead, 12 others injured in explosion that militants say was targeting police and local district administration

The Tehreek-e-Taliban Pakistan (TTP) on Wednesday claimed responsibility for a car-bombing in the parking lot of Quetta’s Serena Hotel that left at least four people dead and 12 others injured.

“A Tehreek-e-Taliban Pakistan suicide bomber targeted police and senior government officials in a high-security area,” read the TTP statement, though police have said that initial investigations show the explosives were planted in a car and were detonated remotely.

The Bomb Disposal Unit has said that 40-50kg of explosives were used in the blast, which produced a deafening sound that was heard by people located several kilometers away. Several vehicles parked nearby caught on fire, which was extinguished by firefighters who reached the area shortly after the blast. Two assistant commissioners are among the injured, and one police official is among the deceased, according to police.

“Our own people are involved in these acts of terrorism,” Balochistan Home Minister Mir Ziaullah Langove told a press conference after the explosion, lamenting that there was a renewed wave of terrorism sweeping the region. To a question, he clarified there had been no threat alerts before the attack.

Balochistan Inspector General of Police Muhammad Tahir Rai told media that the government would release the results of its probe into the bombing as soon as it was completed. He also confirmed that five to six vehicles in the parking lot had been damaged.

Federal Information Minister Fawad Chaudhry, in a posting on Twitter, condemned the blast and said the federal government would issue a statement as soon as the nature of the blast and the damage were determined. Balochistan government spokesperson Liaquat Shahwani, meanwhile, claimed the bombing was a terror attack perpetrated by people who did not wish to see the province prosper. “Those involved will not be able to escape the grip of the law,” he posted on Twitter.

Balochistan Chief Minister Jam Kamal Khan also said he “strongly condemns” the explosion in a posting on Twitter, while Senator Sarfaraz Ahmed Bugti urged the government to ensure that the culprits did not escape justice. “An appropriate response is a necessity. Our security forces have the capability and capacity to give a befitting response,” he added.

The latest attack continues a steady uptick in violence across Balochistan over the past year. Last week, 12 people were injured in an explosion at a football tournament in Hub that was dedicated to the memory of police martyrs.

Last October, seven soldiers of the Frontier Corps and seven security guards were shot dead during a clash with a large group of terrorists on the Makran Coastal Highway in Ormara. In August 2020, eight people, including police and FC personnel, were injured in a blast in Hub.