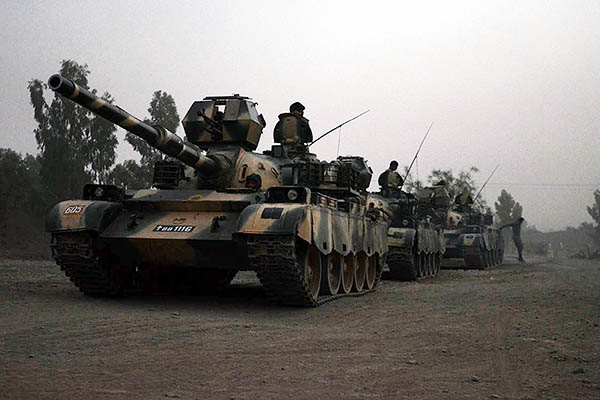 P.M. Sharif says reaction to Zarb-e-Azb from militants should be minimal.

The Pakistan Army on Saturday said it has crippled the command and control system of the local Taliban, while Prime Minister Nawaz Sharif assured the public that the likelihood of a backlash to the ongoing military offensive in the northwest would be “minimal.”

Addressing a national security conference in Islamabad, Sharif said the ongoing strikes against militants were inevitable because peace talks had failed to proceed. But he played down the likelihood of militants being able to hit back.

“If there is a reaction to the operation Zarb-e-Azb it would be very minimal,” Sharif said in an address broadcast live on television.

Pakistan began an offensive in North Waziristan after a brazen attack on the country’s busiest airport in Karachi, which killed dozens and left a nascent peace process in tatters. More than 500 militants and 27 soldiers have been killed in the assault so far, according to the military, though their death toll for insurgents cannot be independently confirmed.

In a statement issued to the media after the conference, military officials said they were confident that the command and control system of the Pakistani Taliban (TTP) had been “crippled.” The statement added: “All political and religious parties agreed that state has to fight and eliminate militancy.”

Sharif added that his nation needed to do more to improve relations with its neighbors. Both Kabul and Islamabad accuse each other of not doing enough to tackle cross border militancy while Pakistan has long had a frosty relationship with India.

“We need to have cordial relations with our neighbors if we want to progress, Pakistan cannot live in isolation. We don’t have relations with a single neighbor to be proud of,” he said. He added: “We want good relations with India.”