Tunisia Scrambles to Save Tourism Industry 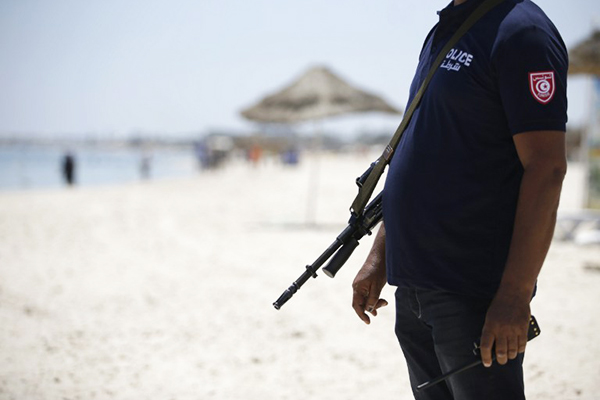 Gunman killed 38 people at a seaside resort on Friday.

Tunisia weighed new security measures on Sunday as it scrambled to secure its vital tourism sector after 38 people were killed at a seaside resort in the worst jihadist attack in its history.

After an emergency meeting late on Saturday, Interior Minister Najem Gharsalli promised new steps to ensure the “protection of Tunisia’s tourist sites and beaches by armed police units.” In a statement carried by Mosaique FM radio, Gharsalli said “we can no longer refrain from taking difficult measures,” and added that at least 1,000 members of security forces would be involved in securing tourist sites.

Authorities had earlier announced plans to deploy armed security officers along the coast and inside hotels from July 1 and to shut down 80 mosques accused of inciting extremism.

The attack saw a Tunisian student disguised as a tourist pull out a Kalashnikov rifle hidden in a parasol and open fire on beachgoers at the Riu Imperial Marhaba hotel in Port El Kantaoui, near Sousse south of the capital Tunis. Witnesses have described scenes of sheer terror, with the gunman mowing down screaming tourists as many ran for their lives. One Tunisian witness said the gunman had only targeted tourists, telling locals: “Stay away, I didn’t come for you.”

Tunisian authorities have so far identified 18 of those killed as 14 Britons, a German, a Belgian, a woman from Ireland, and another from Portugal. Health officials have said identification of the bodies is taking time as many of the victims were not carrying ID at the beach.

The attack was Britain’s worst loss of life in a jihadist attack since the 2005 London bombings. Britain has said at least 15 of its citizens were confirmed dead and warned that the toll is likely to rise. The British government cautioned Sunday that other attacks “are possible” in Tunisia, urging visitors to remain vigilant.

The attack was swiftly claimed by the Islamic State militant group. It came just three months after another I.S.-claimed attack on the Bardo National Museum in Tunis killed 21 tourists and a policeman. It was carried out on the same day as a suicide bombing that killed 26 people at a Shia mosque in Kuwait, which was also claimed by I.S., and a suspected Islamist murder at a factory in France.

With its hundreds of kilometers of coastline, turquoise waters, stunning archaeological sites and relatively low prices, Tunisia has long attracted European tourists. But the tourism industry—which accounts for 7 percent of Tunisia’s GDP and almost 400,000 jobs—has been reeling since the 2011 Arab Spring revolution that ousted President Zine El Abidine Ben Ali was followed by a rise in jihadist attacks. Authorities had announced a nearly 26 percent drop in the number of foreign visitors in April compared with the same month last year.

There has been a huge exodus of shocked tourists since Friday’s attack, with British and Belgian tour operators saying they had flown out some 2,400 visitors by late Saturday. Hundreds more were expected to follow on Sunday.

Shops were open early on Sunday in Port El Kantaoui, and about a dozen tourists could be seen lying on the beach near the site of the attack.

Many in Tunisia have questioned the ease with which the gunman entered the resort and how he was able to kill so many before being shot dead.

“What happened is the sign of security failures,” said Rached Ghannouchi, who heads the country’s second-biggest political party, the Islamist Ennahda.

Analysts say that despite promises from the authorities, it will take a large-scale reform of the country’s forces to ensure better security. Yezid Sayigh of the Carnegie Middle East Center said the police must face “badly needed professional improvements and organizational reforms” for Tunisia to have “an effective, proactive and successful strategy against terrorism.”

In the past four years, dozens of police and soldiers have been killed in clashes and ambushes attributed to jihadists—mainly in the western Chaambi Mountains.

While Tunisia has a tradition of secularism and a strong civil society, disillusionment and social exclusion have fueled radicalism among the country’s youth, with the country exporting some 3,000 jihadist fighters to Iraq, Syria and neighboring Libya.