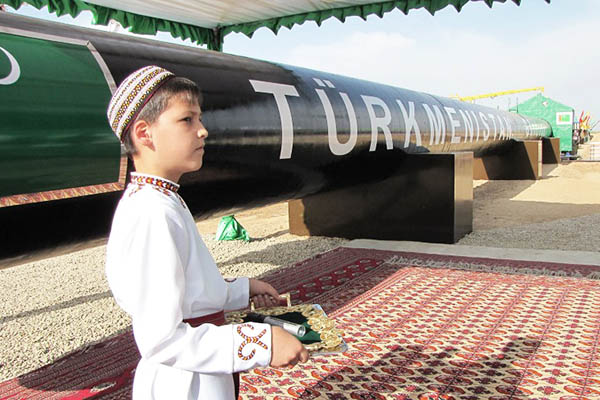 Officials say foreign companies may participate in project, which will be overseen by Turkmengaz.

Officials in energy-rich Turkmenistan announced Thursday that state company Turkmengaz will lead the consortium for a 1,800-kilometer-long pipeline carrying gas from the former Soviet state to energy-hungry India, Pakistan and Afghanistan.

The decision, which was reached unanimously at a meeting of the Turkmenistan-Afghanistan-Pakistan-India (TAPI) steering committee in Ashgabat by ministers from the four countries was relayed by the country’s state news agency.

“The state concern ‘Turkmengaz’ in its capacity as leader of the consortium for the Pipeline Company ‘TAPI Limited’ will oversee coordination in the construction, financing, ownership and operation of the TAPI pipeline,” the agency said Thursday.

A Turkmengaz official speaking to AFP on condition of anonymity said the decision did not mean foreign companies could not participate in a project with costs estimated at around $10 billion. “Turkmengaz will lead and coordinate the work of the consortium into which foreign companies will also enter. Their proposals are currently being studied,” explained the official, without disclosing which companies had made proposals for the project.

Previously Western energy majors such as Chevron, ExxonMobil and Total had been reported as potential leaders of the TAPI consortium.

A Pakistani source with knowledge of the project told AFP that Turkmenistan had decided to take a firmer lead in the project after talks with Total took a downturn. The source said Ashgabat was looking to speed up the project over fears that Iranian gas might flood back onto the market after the signing of a deal between world powers and Tehran over the country’s nuclear program.

Turkmenistan, which has little of its own gas infrastructure, has traditionally refused to give foreign investors ownership stakes in its onshore gas fields, complicating potential projects. The country is also currently in talks with the European Union, Azerbaijan, Turkey and Georgia over the Trans-Caspian pipeline, a $5 billion plus link that would funnel gas along the floor of the Caspian Sea and could provide Europe with a key opportunity to diversify away from Russia-sourced gas.

The TAPI pipeline seeks to connect growing energy markets in South Asia with the mostly untapped potential of Turkmenistan, a country with the fourth largest reserves of natural gas in the world. TAPI is expected to ship up to 33 billion cubic meters of gas annually from Turkmenistan, most of which will be absorbed by India and Pakistan with Afghanistan importing smaller amounts.

The project is key for isolated Turkmenistan, whose economy is almost entirely hydrocarbon-based and heavily dependent on China, which accounts for over 75 percent of its gas sales. Turkmenistan began exports of gas to China in 2009 and aims to export up to 65 bcm there annually by 2020, but by 2018 may face competition from a rival pipeline scheduled to carry 38 bcm annually from Russia to China.