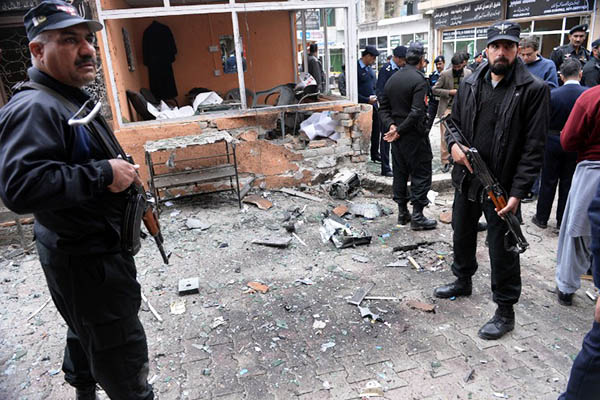 At least 11 people, including a senior judge, were killed and 29 others injured after unidentified gunmen attacked the Islamabad district courts early Monday morning.

Between six and eight attackers entered the district courts, located in Islamabad’s posh F-8 area, and started shooting indiscriminately, causing a stampede. In the confusion, two men detonated suicide vests. “Two suicide bombers detonated themselves in the middle of Islamabad district court in front of the judges’ chamber,” said Islamabad inspector general Sikandar Hayyat. “It was an act of terrorism.”

A spokesman for the Ahrar-ul-Hind militant group, which recently split from the main Tehreek-e-Taliban Pakistan umbrella group, claimed Monday’s attack. There have been reports of disagreement over talks within the TTP, and analysts have voiced fears that any splintering of the movement would render the peace process useless. But the radical cleric leading the TTP’s team for talks insisted the dialogue could still succeed.

The injured and dead have been shifted to the Pakistan Institute of Medical Sciences. “We received 11 bodies and over 20 injured,” said Dr. Ayesha, a spokeswoman for the hospital.

According to police, three judges’ chambers were targeted. “The dead include Additional Sessions Judge Malik Rafaqat Awan,” Hayyat added. He said the attack began around 9 a.m. with gunfire followed by two suicide blasts, which killed 11 people and wounded 29. It was the first suicide attack in Islamabad since June 2011 and the deadliest in the city since a huge truck bomb at the Marriott Hotel killed 60 people in September 2008. According to the eyewitnesses, the exchange of fire between police and extremists continued for around 20 minutes.

Interior Minister Chaudhry Nisar Ali Khan, addressing lawmakers in the National Assembly, said the attack could have been in response to the arrest of seven high-profile terror suspects by intelligence agencies on the outskirts of Islamabad in the past three days. “Our intelligence agencies are hopeful and I assure this House that we will nab the culprits and bring them to justice,” Khan said.

The Tehreek-e-Taliban Pakistan denied any role in the attack. “We condemn this incident,” TTP spokesman Shahidullah Shahid told Newsweek Pakistan via phone. On Saturday, the Pakistani Taliban announced a month-long ceasefire, which was accepted by the government on Sunday. Shahid said the group was committed to the ceasefire and would stick to it “strictly.”

Asad Mansoor, spokesman for Ahrar-ul-Hind, said it staged Monday’s attack. “We claim responsibility for the attack, we are an independent group and have no links with TTP,” he said. “We were a part of TTP earlier but now we operate independently.”

Maulana Sami-ul-Haq, the head of the TTP negotiating team, condemned the court attack and urged the government to stick with the talks. Security analyst Talat Masood said the continued violence was in danger of making the talks process meaningless. “It only goes to show the multiplicity of various militant organizations operating in Pakistan,” he said.