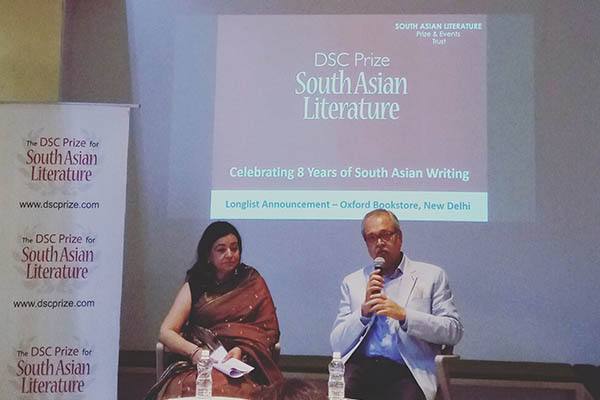 Shortlist to be announced on Nov. 14, with the winner receiving $25,000 in prize money

Two Pakistani authors have made the longlist for the 2018 DSC Prize for South Asian Literature.

Unveiled in New Delhi on Oct. 10, the longlist contains 16 novels, including Exit West by Mohsin Hamid and Home Fire by Kamila Shamsie. Of the remaining 14 candidates for this year’s prize, four are translated works where the original writings were in Assamese, Kannada, Tamil and Hindi. It features six women authors in total and three women translators, and two outstanding debut novels that find place alongside the works of established writers. The remaining books on the list are:

All The Lives We Never Lived by Anuradha Roy

The Ministry Of Utmost Happiness by Arundhati Roy

The Saga of Satisar by Chandrakanta

No Presents Please by Jayant Kaikini (Translated by Tejaswini Niranjana)

The Book Of Chocolate Saints by Jeet Thayil

A State of Freedom by Neel Mukherjee

Marriage Of A Thousand Lies by SJ Sindu

Night Of Happiness by Tabish Khair

A five-member international jury selected these 16 books from a list of 88 eligible entries, as best representative of fiction related to the South Asian region.

“It gives me enormous pleasure to announce this longlist of 16 works of fiction for the DSC Prize for South Asian Literature 2018,” said Rudrangshu Mukherjee, chair of the jury. “My fellow jurors and I read through over 80 works of fiction and then arrived at this list of 16 which we will further prune to prepare a shortlist and then finally a winner. It was an exhilarating and an exhausting exercise reading these books and then preparing this list. Exhausting because of the work involved and I don’t need to emphasize this. Exhilarating because of the plethora of extraordinary talent that we encountered. Writers were willing to experiment with form, with unusual themes and to express themselves with elegance. I encountered touching poignancy, wit and verve and great inventiveness. In many ways trying to judge such a talented group of writers is a humbling experience. I am certain when we finish the entire judging process, I, at least, will emerge from it an enriched human being.”

“I commend the jury panel for going through all the entries and coming up with such an excellent longlist for the DSC Prize for South Asian Literature 2018,” said co-founder of the DSC Prize Surina Narula. “I find the longlist exciting and feel that each of the novels is a must read as they successfully bring out the nuances and challenges of the ever evolving South Asian life. I would like to congratulate each of the longlisted authors and translators, and wish them the very best. Given such a strong longlist, it will be interesting to see which books make it to the shortlist from here.”

The shortlist of five or six books from the 16 will be announced on Nov. 14 at the London School of Economics & Political Science. The final winner will be announced at a special Award Ceremony to be hosted in a South Asian city that has yet to be finalized. The winner will receive $25,000 in prize money.