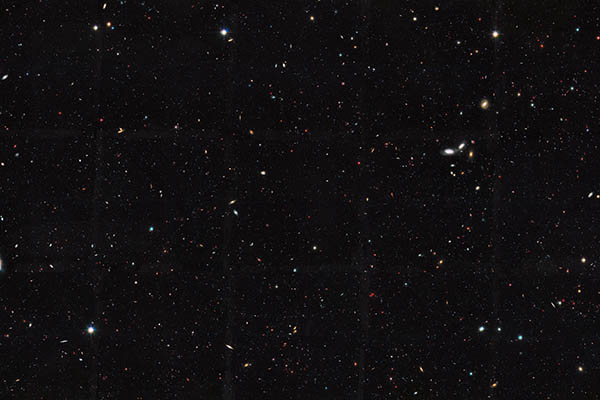 U.S. space agency says current technology only allows us to glimpse 10 percent of what is out there.

There are a dizzying two trillion galaxies in the Universe, up to 20 times more than previously thought, astronomers reported on Thursday.

The surprising find, based on 3D modeling of images collected over 20 years by the Hubble Space Telescope, was published in the Astronomical Journal.

Scientists have puzzled over how many galaxies the cosmos harbors at least since U.S. astronomer Edwin Hubble showed in 1924 that Andromeda, a neighboring galaxy, was not part of our own Milky Way. But even in the era of modern astronomy, getting an accurate tally has proven difficult.

To begin with, there is only part of the cosmos where light given off by distant objects has had time to reach Earth. The rest is effectively beyond our reach.

And even within this “observable Universe,” current technology only allows us to glimpse 10 percent of what is out there, according to the new findings.

“It boggles the mind that over 90 percent of the galaxies in the Universe have yet to be studied,” commented Christopher Conselice of the University of Nottingham, who led the study. “Who knows what interesting properties we will find when we observe these galaxies with the next generation of telescopes,” he said in a statement.

Using deep space images from Hubble, Conselice and his team painstakingly converted them into 3D to measure the number of galaxies at different times in the history of the Universe. The analysis reached back more than 13 billion years—very near the time of the “Big Bang” thought to have given birth to the Universe.

A galaxy is a system of millions or billions or stars, held together by gravity, with planetary systems within them. Using new mathematical models, the astronomers were able to infer the number of “invisible” galaxies beyond the reach of telescopes, leading to the surprising realization that the vast majority are too faint and far away to be seen.

When the Universe was only a few billion years old, there were 10 times as many galaxies in a given volume of space than there are today, the findings suggest. This in turn suggests that “significant evolution must have occurred to reduce their number through extensive merging of systems.”