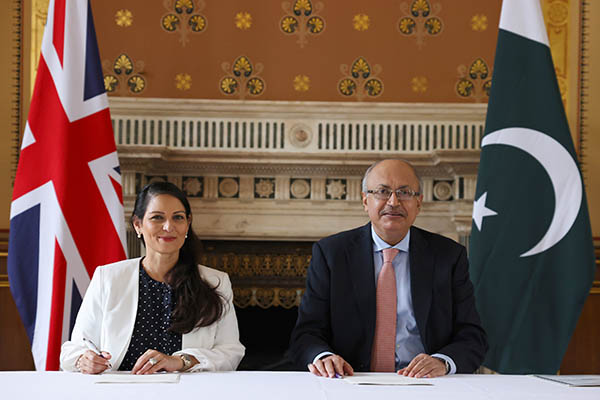 British Home Secretary Priti Patel on Wednesday confirmed that the U.K. has inked a deal allowing the extradition of “criminals” and “immigration offenders” from Britain to Pakistan.

“I’m proud to have signed a new landmark agreement with our Pakistani friends to return foreign criminals and immigration offenders from the U.K. to Pakistan,” she wrote in a posting on Twitter. “This deal shows our [New Plan for Immigration] in action, as we deliver for the British people,” she added.

Describing the deal as an “important agreement,” she said it would grant the U.K. the ability to “remove people to Pakistan who have no legal basis to be in our country.” In a statement, the U.K. government said this was the fifth returns agreement inked between Britain and a foreign country in the past 15 months.

“I make no apology for removing dangerous foreign criminals and immigration offenders who have no right to remain in the U.K.,” it quoted Patel as saying. “The British public have quite rightly had enough of people abusing our laws and gaming the system so we can’t remove them,” she added.

“This agreement, which I am proud to have signed with our Pakistani friends, shows the New Plan for Immigration in action and the government delivering,” she said. “Our new Borders Act will go further and help end the cycle of last-minute claims and appeals that can delay removals,” she added.

The deal was signed in London during a meeting between Patel, Interior Secretary Yousaf Naseem Khokhar, and Pakistan High Commissioner to the U.K.  Moazzam Ahmad Khan. The British government’s statement said Pakistani nationals make up the seventh largest number of foreign criminals in prisons in England and Wales, totaling nearly 3% of the foreign national offender population.

It said the agreement underlined both countries’ ongoing commitment to tackling the issue of illegal migration and the significant threats it poses to both nations. “The agreement also includes ongoing work to improve and expand U.K.-Pakistani law enforcement cooperation,” it said, adding that the U.K. had removed 10,741 foreign national offenders globally from January 2019 through December 2021.

While the agreement has been hailed by the British home secretary, it has also raised questions about the nature of the offenders that could be “returned” to Pakistan. According to legal experts, the text of the deal grants the U.K. the right to deport any “unwanted” individuals—even those who have never set foot inside Pakistan but have ancestral linkages to the country.

“The agreement renews and updates, in a bilateral context an earlier agreement between Pakistan and the European community regarding readmission of persons residing without authorization concluded in October 2009,” read a statement issued by the Pakistan High Commission. “The bilateral agreement was necessitated by the exit of the U.K. from the European Union,” it added.

In the past year, the U.K. has entered similar deals with Albania, Serbia and Nigeria.