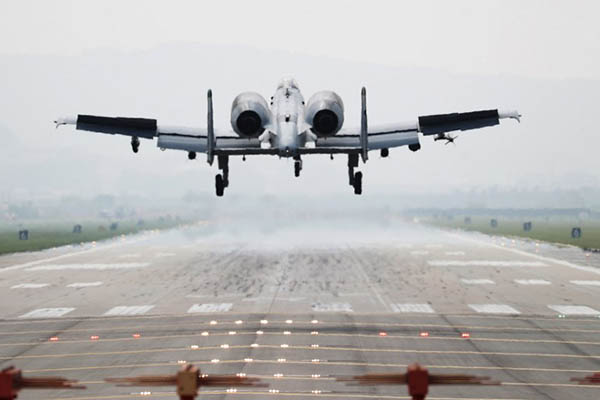 Perceived as making light of Taliban offensive, the tweet has been deleted and prompted an apology

The U.S. Air Force drew flak on Thursday after it published—then deleted—a tweet making light of a Taliban offensive that killed up to 25 Afghan forces and at least five civilians.

The tweet from the official Air Force account built on an internet phenomenon in which an audio snippet with just two syllables is heard by listeners as either “Yanny” or “Laurel.” The meme has prompted fierce online debate between rival camps.

In an apparent attempt at humor, the Air Force linked the debate to this week’s Taliban assault on Farah city in western Afghanistan, near the border with Iran. The tweet refers to the internet meme, and the sound a U.S. A-10 ground-attack plane makes when it fires its Gatling gun.

“The Taliban Forces in Farah city #Afghanistan would much rather have heard #Yanny or #Laurel than the deafening #BRRRT they got courtesy of our #A10,” the Air Force tweet read, before linking to a story about the Farah offensive.

Reaction online was swift, with many users failing to see the joke.

“I have a suggestion. Next time get a perspective from the folks who carried out the missions. Publishing the thoughts of some sadistic jerk-off who is excited by military hardware is not a good look,” Twitter user @radical6216 wrote. “Military humor is always THE BEST, isn’t it? Nice to take a break from, you know, killing people,” @MamanUbu wrote.

Some users came to the tweet’s defense and said critics were being too politically correct, but a few hours after the tweet was published, the Air Force took it down. “We apologize for the earlier tweet regarding the A-10. It was made in poor taste and we are addressing it internally. It has since been removed,” the Air Force said.

On Wednesday, the Pentagon had made light of the Yanny/Laurel debate, tweeting a photo of a U.S. Marine Corps instructor berating a recruit: “I said it’s #Yanny, recruit, not #Laurel!”

U.S. and Afghan aircraft this week bombed Taliban positions in Farah after the insurgents launched a major attempt to capture the provincial capital, with fearful residents seeking shelter from explosions and gunfire.

The Air Force tweet brought brief attention in the U.S. to the nearly 17-year-old war in Afghanistan, which despite costing more than $1 trillion still has no end in sight. “Our Afghan partners’ success in places like Farah are a testament to the tremendous improvement in the Afghan national army, Afghan special security forces and the Afghan air force,” Pentagon spokeswoman Dana White said.