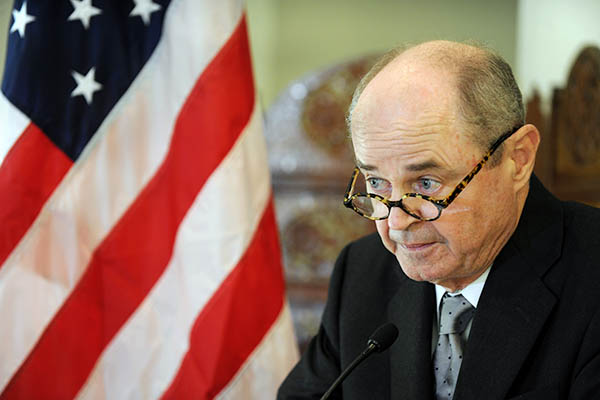 U.S. special envoy for Afghanistan and Pakistan says he expects several thousand troops to persist in Afghanistan beyond 2014 pullout.

A U.S. envoy on Tuesday dismissed suggestions that Washington would withdraw all troops from Afghanistan after next year, saying that both countries wanted to preserve a smaller force.

Aides to U.S. President Barack Obama earlier this year openly mulled the so-called “zero option” of a complete withdrawal from Afghanistan once U.S. troops end their combat role in 2014.

“We talk about the zero option—that’s not an option for the United States,” said James Dobbins, the U.S. special envoy for Afghanistan and Pakistan. “It’s obviously an option for the Afghans—if they don’t want anybody, we’re not going to stay. But I don’t think that’s an option the Afghans are likely to choose,” he said at the Atlantic Council, a Washington-based think tank.

Dobbins said he expected “several thousand American forces and several thousand non-American NATO forces” in 2015 and beyond. Roughly 100,000 foreign troops now serve in Afghanistan, two-thirds of them from the United States.

Obama has pledged to the war-weary U.S. public to end the country’s longest-ever war, which was launched to fight Al Qaeda and their Taliban allies after the September 11, 2001 attacks.

Some analysts have called the public discussion of the “zero option” part of a U.S. strategy to press Afghan President Hamid Karzai, who has had uneven relations with the Obama administration, to assume more responsibility for security.

Pakistan was the primary supporter of the ousted Taliban regime and Afghan and U.S. officials have frequently voiced concern over allegations of continued Pakistani links to extremists.

But Dobbins said Sharif understood that Pakistan cannot build its economy without peace at home as well as stable relations with Afghanistan and historic enemy India.