U.S. Drops ‘Mother Of All Bombs’ in Afghanistan 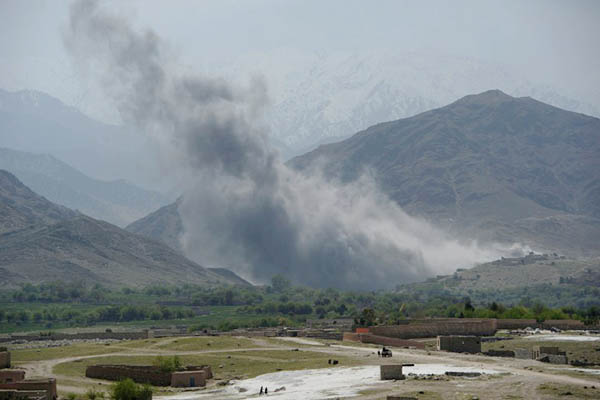 Afghan officials claim at least 36 Islamic State fighters were killed in the strike.

The U.S. military on Thursday dropped the largest non-nuclear bomb ever deployed in combat, targeting an Islamic State complex in Afghanistan, the Pentagon said.

The GBU-43/B Massive Ordnance Air Blast bomb—better known by its nickname, the “Mother Of All Bombs”—hit a tunnel complex at 7:32 p.m. in Achin district in Nangarhar province, U.S. Forces Afghanistan said in a statement.

The huge bomb, delivered via an MC-130 transport plane, has a blast yield equivalent to 11 tons of TNT, and the weapon was originally designed as much to intimidate foes as to clear broad areas. “The GBU-43/B is the largest non-nuclear bomb ever deployed in combat,” Air Force spokesman Colonel Pat Ryder said.

Achin District Governor Esmail Shinwari said the bomb landed in the Momand Dara area. “The explosion was the biggest I have ever seen. Towering flames engulfed the area,” Shinwari told AFP. “We don’t know anything about the casualties so far, but since it is a Daesh stronghold we think a lot of Daesh fighters may have been killed.”

“As a result of the bombing, key Daesh hideouts and deep tunnel complex were destroyed and 36 I.S. fighters were killed,” the defense ministry said in a subsequent statement.

U.S. Navy Captain Bill Salvin, spokesman for U.S. Forces Afghanistan, said in an email to AFP that a bomb damage assessment was being carried out. As to the possibility of civilian casualties from such a huge weapon, Salvin said: “Friendly forces scouted the area and noted the lack of civilian presence. The target was chosen to ensure the maximum effect against [I.S.] while preventing civilian casualties.” The Afghan presidential palace also said precautions were taken to avoid civilian casualties

General John Nicholson, who heads U.S. Forces Afghanistan, described the weapon as the “right munition” to reduce I.S. obstacles and maintain the momentum against jihadists in the region. The strike hit a system of tunnels and caves that I.S. fighters had used to “move around freely, making it easier for them to target U.S. military advisers and Afghan forces” nearby, White House spokesman Sean Spicer said. “We must deny them operational space, which we did,” Spicer added.

The Afghan government was aware of the U.S. plan to bomb the I.S. tunnel complex, presidential spokesman Shah Hussain Murtazawi suggested. “Heavy casualties have been inflicted on the enemy,” Murtazawi said on Facebook, ruling out the possibility of civilian casualties.

The U.S. military on Tuesday said an American special forces soldier had been killed while conducting operations against I.S. in Nangarhar, although it was not clear if Thursday’s strike was connected.

Nangarhar, which borders Pakistan, is a hotbed of I.S. militancy. U.S. forces have conducted a number of airstrikes on jihadist bases in the area since August last year. I.S., notorious for its reign of terror in Syria and Iraq, has been making inroads into Afghanistan in recent years. It has attracted disaffected members of the Pakistani and Afghan Taliban as well as Uzbek Islamists. But the group has been steadily losing territory in the face of heavy pressure both from U.S. airstrikes and a ground offensive led by Afghan forces.

The Islamic State group’s strength in Afghanistan has fallen to 600 to 800 fighters from 3,000 in early 2016, NATO has said, adding that it killed the top 12 I.S. commanders in the country last year.

The MOAB was rapidly developed in 2002-2003 around the time of the U.S.-led invasion of Iraq. According to the Air Force, the last time the MOAB was tested in 2003, a huge mushroom cloud could be seen from 20 miles away.

Despite its massive power, the MOAB still pales in comparison to a nuclear weapon. Even the smallest of the U.S. military’s atomic arsenal, the B-61 at its minimum configuration, has an explosive yield roughly 30 times that of the MOAB.