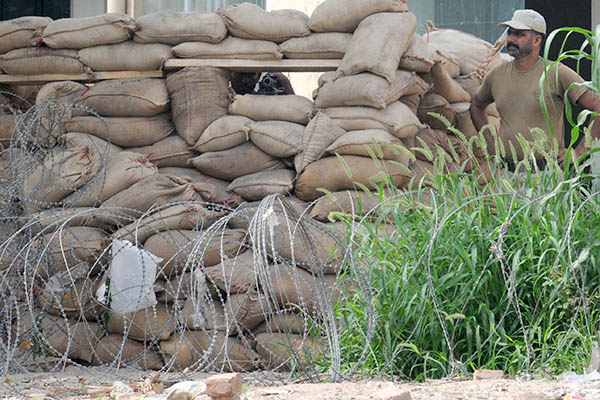 Spokeswoman says it is unclear when the Lahore mission will reopen.

The United States has evacuated all non-emergency staff from its consulate in Lahore, citing “specific threats” amid a worldwide alert over Al Qaeda intercepts.

The U.S. State Department also reiterated a longstanding warning to U.S. citizens to avoid all non-essential travel to Pakistan, in a statement issued late Thursday.

The move came as Pakistan’s troubled southwestern city of Quetta, focus of a surge in sectarian bloodshed, was hit by its second attack in two days as gunmen shot dead at least nine people outside a mosque on Friday.

The worshippers were gunned down as they left prayers for Eid ul-Fitr, the festival marking the end of the Islamic holy month of Ramzan,which was marred in Pakistan this year by at least 11 attacks, which killed 120 people.

A suicide bomber struck at a police funeral in the city on Thursday, killing 38 people in an attack claimed by the Taliban that will raise yet more concerns about the violence that has continued unabated since the newly-elected government took office.

The closure of the U.S. consulate in Pakistan’s second-largest city and cultural capital came amid heightened security measures in Islamabad, where police and soldiers were maintaining a highly visible presence on the streets.

Meghan Gregoris, spokeswoman for the U.S. embassy in Islamabad, said the evacuation was not linked to a terror threat that prompted the closure of 19 diplomatic missions in the Middle East and Africa.

“We received information regarding a threat to our consulate in Lahore. As a precautionary measure we have undertaken a drawdown for all but emergency personnel in Lahore,” she said.

The U.S. embassy and consulates in Karachi and Peshawar were closed Friday for the Eid public holiday but are expected to open again on Monday, she said. The Lahore mission was likely to remain closed and there was currently “no indication” of when it might reopen.

“We will continue to evaluate threat reporting and take decisions as appropriate,” she said.

Despite Pakistan’s fractious alliance with the United States in the “war on terror,” anti-American sentiment runs deep in the restive, nuclear-armed country, fuelled in part by the CIA’s campaign of drone strikes against militants in the tribal northwest.

Washington maintains the strikes are an important and effective weapon in the fight against Taliban and Al Qaeda extremists, but Pakistan denounces them publicly as a violation of sovereignty.

U.S. diplomatic missions have been the target of violence in the past. A suicide car bomber rammed a U.S. diplomatic vehicle in Peshawar last September, killing two people—at least the third time the mission and its staff had been attacked by Taliban and Al Qaeda-linked militants since April 2010.

This week’s closure of U.S. missions mainly in the Arab world was reportedly ordered because of intercepted messages from Al Qaeda leader Ayman al-Zawahiri to the terror network’s Yemeni franchise.

The alert focused on Al Qaeda in the Arabian Peninsula, a Yemen-based group that has made several attempts to attack the United States in recent years and is widely seen as the group’s most sophisticated offshoot.