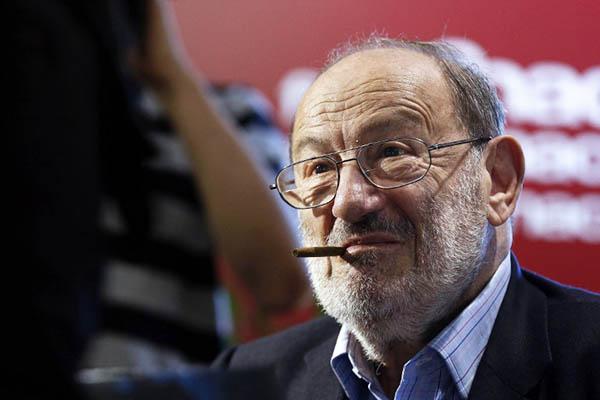 The Italian author was acclaimed for his philosophical bestsellers.

Italy’s Umberto Eco, whose death at 84 has been announced by the Italian media, leapt from being an internationally renowned philosopher to become an author of bestselling novels.

Best-known for his 1980 historical mystery novel The Name of the Rose, which has been translated into more than 40 languages, Eco’s fiction bears all the hallmarks of his academic work as a semiologist as he explores the link between fantasy and reality.

Often called the study of signs, semiotics is a contemporary philosophy that analyses the significance of communication, whether spoken, written, scientific or artistic.

“Books are not meant to be believed, but to be subjected to inquiry. When we consider a book, we mustn’t ask ourselves what it says but what it means,” Eco said on his website.

A gothic murder mystery set in an Italian medieval monastery, The Name of the Rose combines semiotics, biblical analysis, medieval studies and literary theory. It was adapted for the big screen by Jean-Jacques Annaud in 1986, starring Sean Connery and Christian Slater, and has sold millions of copies.

Eco, who continued his academic work late in life, continued his literary success with Foucault’s Pendulum (1988) about the lost treasure of a sect called the Knights Templar, The Island of the Day Before (1994), Baudolino (2000) and The Prague Cemetery (2010), a novel about the rise of modern anti-Semitism.

Eco was born on Jan. 5, 1932, at Alessandria in the northern Italian region of Piedmont. His father, Giulio Eco, was an accountant before being drafted to fight in three wars.

His family name was reportedly an acronym of the Latin ex caelis oblatus, “a gift from the heavens,” which was given to his grandfather by a city official.

The young Umberto had a Roman Catholic upbringing, being educated at one of the Salesian institution’s schools. His father was very keen for him to read law, but instead he entered the University of Turin in order to take up medieval philosophy and literature.

His thesis, for which he was awarded a degree in 1954, was on the topic of Thomas Aquinas, a Catholic Dominican priest and one of the most important Medieval philosophers and theologians. In 1956 he published his first work, The Aesthetics of Thomas Aquinas, which was an extension of his doctoral thesis.

In that period, Eco abandoned the Roman Catholic Church after a crisis of faith.

“… The first quality of an honest man is contempt for religion, which would have us afraid of the most natural thing in the world, which is death, and would have us hate the one beautiful thing destiny has given us, which is life,” he said.

From 1956-1964 he worked as a cultural editor for RAI, Radiotelevisione Italiana, the state broadcasting station. He also became a lecturer at the University of Turin from 1956 to 1964.

In 1959 he became editorial consultant at the publishing house Bompiani where he started to develop his ideas on semiotics. From 1962, in The Open Work, one of his numerous treatises, he laid out his fundamental theory that as any work is composed of an infinite set of signs, it becomes an open work offering a multiplicity of possible interpretations.

In 1963 Eco joined “Gruppo 63” an Italian avant-garde movement made up of artists, musicians and writers who aimed to find new forms of literary and aesthetic expression. His membership of the group inspired him in his future writings. In 1975 he was appointed professor of semiotics at Bologna University and published The Theory of Semiotics, laying out his theories in 1976.

By the late 1970s his expertise was widely recognized, but it was only in 1980, with the success of The Name of the Rose that he became known outside the academic world, managing to break with the esoteric world of philosophic language.

Doctor Honoris Causa in more than 30 universities around the world, Eco directed the school of human sciences at Bologna University. A polyglot, he was also the honorary president of the International Center of Semiotics and Cognitive Studies at the University of San Marino and a member of UNESCO’s International Forum.

He leaves a wife, Renate Ramge Eco, a German art teacher whom he married in 1962 and with whom he had a son and a daughter. He divided his time between an apartment in Milan and a vacation house near Rimini on the eastern Italian coast.