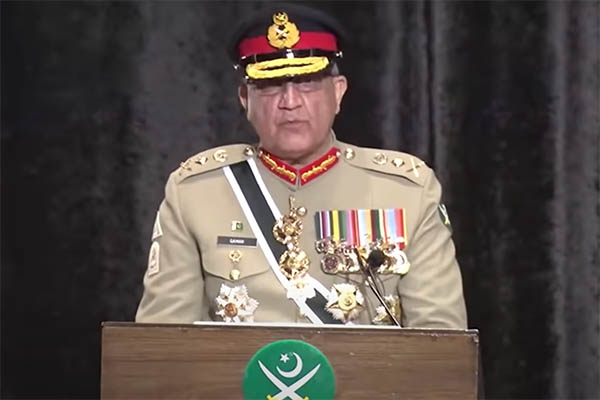 Warning of ongoing attempts to discredit Pakistan’s armed forces, Chief of Army Staff Gen. Qamar Javed Bajwa on Sunday maintained that the threat of “fifth generation or hybrid war” would be overcome through a united front.

“On this occasion, I would like to turn your attention to another challenge. This has been imposed on us through fifth generation or hybrid war,” he said, adding that its intent was to discredit the country and its armed forces. Stressing that authorities were aware of this threat, he said the Army—in cooperation with the nation—would succeed in overcoming it.

Addressing a ceremony at the General Headquarters in Rawalpindi as part of the 55th Defense and Martyrs’ Day celebrations, Bajwa said Pakistan had fought for years to attain peace and it was now time to transform that into prosperity and development.

Noting the challenges of the past 20 years, he said the country had faced conflict on its eastern and western fronts, as well as natural disasters such as floods, earthquakes and locusts attacks. Throughout these “challenging” times, he said, the country refused to accept defeat and had emerged victorious. “Now we have to turn this peace into prosperity and development. As a nation we have to fight for it,” he said, and urged all citizens to adopt Quaid-e-Azam Mohammad Ali Jinnah’s principles of unity, faith, and discipline, as well as his directives to “work, work and just work.”

The Army chief said that Pakistan wants peace in its region, adding that the country’s efforts in achieving peace in Afghanistan were a testament to this. He slammed neighboring India’s “irresponsible attitude,” and lamented that it had taken an “illegal step” in ending the special status of India-held Jammu and Kashmir. “India has once again threatened peace in the region,” he said, reiterating that the region was an internationally accepted dispute. He said Pakistan does not accept “any unilateral decision” of the Indian government.

“The founder of Pakistan had declared Kashmir as the jugular vein of Pakistan,” he said and warned Delhi that Islamabad would not be “intimidated” by its stockpiling of newly acquired weapons.

“The armed forces of Pakistan are fully equipped, vigilant and aware,” he said, and promised to respond to any enemy aggression with full force. “Pakistan is a living reality; our blood, passion, action will provide proof of this on every front,” he said, adding that while Pakistan was a peace-loving nation, it would not hesitate to respond to any country that imposed war on it. “We proved this by responding to the failed Balakot attack,” he said.

The Pakistan Army chief said that the country’s armed forces had rendered many sacrifices for global peace, adding that the world had acknowledged this. Pointing to Sept. 6, 1965 as an “immortal chapter” in Pakistan’s history, he said that numerous stories of solidarity, patriotism, sacrifice and bravery had come to the forefront on that date. He said this date was a memorial to all the country’s martyrs of the 1948, 1965, 1971 and Kargil wars.

“This day reminds us that we defeated an enemy much bigger than us. We are ready today as well to defeat the nefarious plans of the enemy,” he said and paid tribute to the families of the martyrs and assured them that their sacrifices would never be forgotten.

“Our martyrs are our heroes,” he said, adding that nations that forget their heroes are forgotten in history.

The Army chief conferred military awards to Army personnel for acts of gallantry during various operations during the ceremony. According to a press release issued by the Inter-Services Public Relations, 40 officers were awarded Sitara-e-Imtiaz (Military); 24 officers and soldiers were awarded Tamgha-e-Bisalat; and one soldier was awarded the United Nations Medal. Family members received the medals for martyrs.