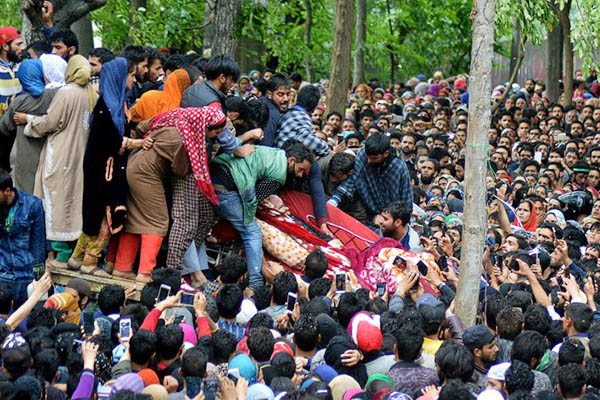 Indian soldiers shot dead five alleged militants in Kashmir, including a rebel university teacher, in a gunfight on Sunday that triggered violent protests in which five civilians were killed.

Thousands took to the streets in India-administered Kashmir to show support for the slain militants. Government forces opened fire to break up the protests, director general of police Shesh Paul Vaid said.

Hundreds of people were injured in the protests, according to doctors.

Government forces swooped on the village of Badigam, in Shopian district south of the capital Srinagar, following a tip-off about armed militants holed up inside a house. The rebels refused an offer to surrender, triggering a fierce gun battle, Vaid told AFP.

A special appeal was made to Mohammad Rafi Bhat, a university sociology teacher who only went underground with the rebels on Friday. Kashmir University, where he taught, was ordered closed for two days, according to a university statement.

“We brought his father from his home to persuade him to surrender, but he, like all of them, refused,” Vaid said, confirming five rebels died in the firefight.

A top commander of Hizbul Mujahideen, a key rebel group, was also among the dead.

As news of the trapped militants spread, residents took to the streets across southern Kashmir shouting slogans demanding an end to Indian rule, witnesses and a police officer said.

Another police officer, speaking on condition of anonymity, said at least 30 people were injured in clashes with government forces who fired live ammunition, pellet guns and tear gas. A doctor at a hospital in Shopian said hundreds of injured needed treatment.

“We have reached our full capacity. We have run out of essential medicines, there are no more ambulances,” he told AFP.

On Saturday, three rebels and a civilian had died during a firefight in Srinagar—the latest in a string of gun battles in recent weeks across the territory disputed by India and Pakistan since they split in 1947.

A curfew was ordered in the capital on Sunday and mobile internet services were shut down in much of the India-administered region.

Fighting in Kashmir this year has left 120 dead, according to officials, including 22 civilians, 67 militants and 28 security forces. India has deployed more than 500,000 soldiers in the restive region to tackle rising militancy as civilian support for the rebels grows.

India accuses Pakistan of fueling the insurgency, a charge Islamabad denies saying it only provides diplomatic support to Kashmiris’ right to self-determination.