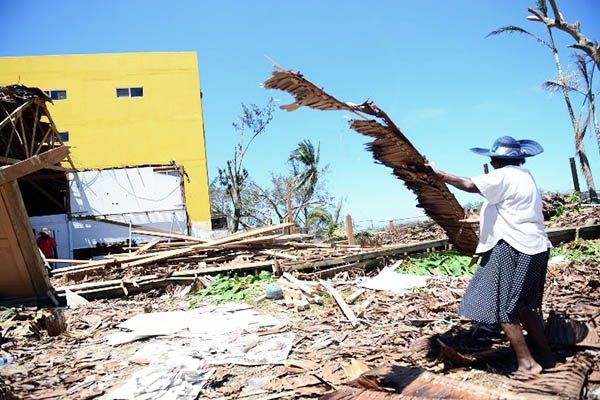 Days after a massive tropical cyclone lashed the Pacific island nation of Vanuatu, residents of the capital Port Vila slowly began picking up the pieces amidst apocalyptic scenes.

Access to water was partially restored, stores began reopening and the town’s airport finally began accepting flights as aid workers streamed in to take the measure of what many have said might be one of the region’s worst weather disasters. “It lasted for hours, it was endless,” said one taxi driver in Port Vila, still visibly in shock from the storm which hit the island chain on Friday night.

“The cyclone terrified us. I have never seen anything like it,” he said. His house was flooded, but not destroyed like many of the others in the town.

Around him, trees, metal roof sheeting and all manner of debris littered the road from Port Vila’s international airport to the town. At the beach, several boats lay on their side. Bigger and more solidly constructed buildings largely remain standing but almost all have suffered some damage.

For some structures, entire sections of concrete wall were destroyed by Severe Tropical Cyclone Pam, which tore through the country packing wind gusts of up to 320 kilometers an hour. Emergency shelters have opened for the homeless. But water has not yet been fully restored, and a curfew was in place from 6:00 p.m. onwards to prevent looting with the country still in a state of emergency.

An AFP reporter in Port Vila said the streets of the capital were virtually deserted as night set in.

Entire neighborhoods, meanwhile, are without power. Only the two main casino hotels and a handful of homes with generators had lights. “Some people took refuge in caves,” said one rescue worker. “These are people used to this kind of deluge.”

Hotels in Port Vila, once catering to holidaymakers from Australia and New Zealand, also suffered significant damage with roofs torn off, windows shattered and major flooding. “I have been here since 1999, and I have never seen something of this magnitude,” said one Australian who worked at a seaside hotel.

The official death toll in Port Vila, where aid workers said up to 90 percent of homes have been damaged, stands at six with more than 30 injured, although there are fears this is likely a fraction of the fatalities caused by the storm.

French ambassador Alain du Boispean said it was impossible at present to estimate a casualty toll across the country’s more than 80 islands. But he said the human toll in the capital did not appear to be dramatic.

Military planes from Australia, New Zealand and France have since Sunday been arriving loaded with food, shelter, medicine and generators, along with disaster relief teams. But workers on the ground said there was no way to distribute desperately needed supplies across the archipelago’s 80 islands, warning it would take days to reach remote villages flattened by the monster storm.

“Our aim is to ensure effective coordination of resources between our three countries, and to carry out an assessment of what is needed,” said Clement Preault, a French government official at the country’s mission in nearby New Caledonia who has been deployed to Vanuatu, referring to France, Australia and New Zealand. “The logistical challenge is an important one, given the geography of Vanuatu.”