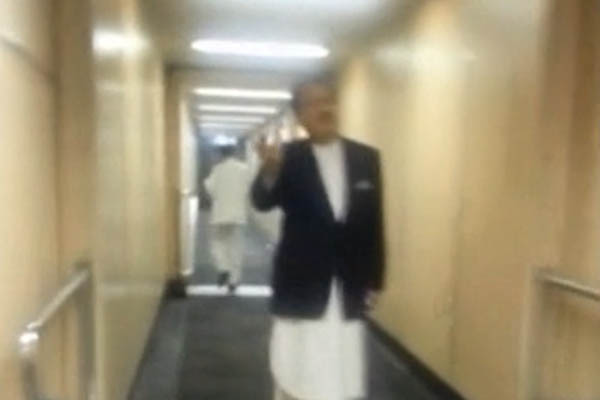 A video of angry Pakistani airline passengers throwing two lawmakers off a plane for delaying its departure went viral on Tuesday, sparking a passionate debate online about the country’s so-called ‘VIP culture.’

A Pakistan International Airlines (PIA) flight en route to Islamabad from Karachi took off almost two hours late on Monday night, with a government official Tuesday confirming the delay was partly due to the late arrival of two politicians.

Senior government and military figures in Pakistan enjoy a host of lavish privileges, from plots of land to heavy police escorts that disrupt traffic. They are often able to keep flights that are ready to depart waiting on the tarmac for their arrival.

But irate passengers on the PIA plane decided to hit back—aiming a string of invective toward Ramesh Kumar Vankwani, a minority Hindu member of the ruling PMLN party, and later at the country’s former interior minister Rehman Malik. In one of the videos, apparently shot on a mobile phone, the passengers can be seen waiting at the door of the plane for Malik. As he walks down the jetway, a man shouts: “Malik saheb you should go back. You should apologize to these passengers. You should be ashamed of yourself! 150 passengers have been put out because of you.”

Another man can be heard saying: “We’ve taken it for 68 years. Are we going to take it another 68?” referring to the country’s age.

The embarrassed politician later turned back. Vankwani left the flight after passengers threatened to beat him with shoes.

The PIA flight was not delayed for me.I saw one guy looked to be drunk shouting at PIA and I decided to return as the door was closed

I am neither a VIP nor ever I behave VIP.I travel economy class.i saw two passengers abusing PIA.i saw them and returned to the lounge.

Many Pakistanis on Twitter hailed the event as a rare example of ordinary people standing up to the powerful—with some connecting it to the protest movement against government corruption led by opposition leader Imran Khan.

I hv right to defend myself agst the allegation.PK370 /1900hr was delayed b/c tech reasons/was expected to leave at 2030. So no delay for me

“What a delight to watch the video. At last someone stood up & everyone joined. Salute to all those who raised there [sic] voice #NotoVipCulture” tweeted user Frasat Mahmood. Others, however, criticized the abusive language and threats of violence, noting that the video promoted vigilantism over dialogue to resolve issues.

Shujaat Azeem, an aide to Prime Minister Nawaz Sharif said two airport officials were being suspended over the incident. He said in a statement the flight was delayed for 90 minutes due to technical reasons and it was delayed for another 25 minutes because Malik was late.