Home Scope Wait, What About Gitmo?

Wait, What About Gitmo? 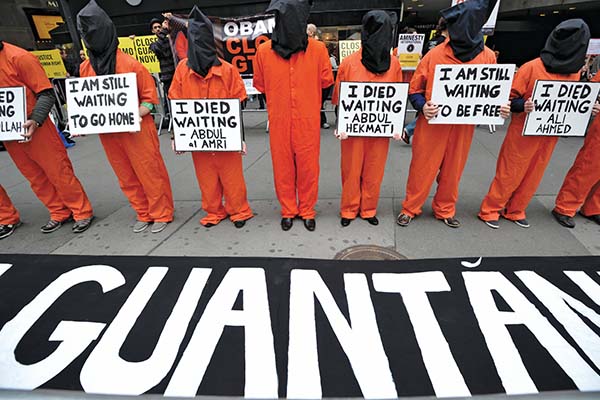 Quietly, Obama may be moving ahead.

Three weeks since Obama announced his intention to reform the drone wars and revive his long-dormant effort to close the detention facility at Guantánamo Bay, the national-security conversation has been dominated by the Justice Department’s aggressive crackdown on leaks and revelations about the National Security Agency’s surveillance activities.

One might expect those controversies to have overwhelmed Obama’s announced efforts. But, at least on Gitmo, there seem to be some signs Obama is quietly pressing on. Late last week came word of a fact-finding trip to the prison by Sens. Dianne Feinstein and John McCain, and White House Chief of Staff Denis McDonough. The excursion was seen as a positive signal by those who want Obama to close Gitmo because it suggests that he is putting muscle behind his promise and that he understands he can succeed only by engaging Congress.

Meanwhile, since announcing plans to name new Gitmo envoys at both State and the Pentagon, the White House has given no indication when those appointments will come. But Obama may have already settled on a candidate, at least at State. One administration official says this person is an “outsider” rather than a foreign-service professional. The source adds that the likely pick has political chops and a strong familiarity with Congress. That would be welcome news on Capitol Hill.

Another potentially positive indicator for supporters of closing Guantánamo: Yemen announced this week that it had begun to work with Saudi Arabia to develop a rehabilitation program for jihadists. That is a key development because among the remaining 166 detainees at Gitmo are 56 Yemenis. In early 2010, Obama had imposed a ban on their return to Yemen because of the iffy security situation there. He recently lifted the ban, contingent on assurances that they could be repatriated safely. A rehab program could smooth the way for their return.

But proponents of closing Guantánamo say the most important signal has yet to arrive: evidence that Obama is willing to spend significant political capital on the effort. That could come in the form of directing Secretary of Defense Chuck Hagel to issue national-security waivers to bypass onerous restrictions Congress has imposed on transferring detainees from the prison. “If Obama’s serious,” says Carlos Warner, a federal public defender who has 11 clients at Guantánamo, “he’ll start transferring men immediately using the authority he already has.”