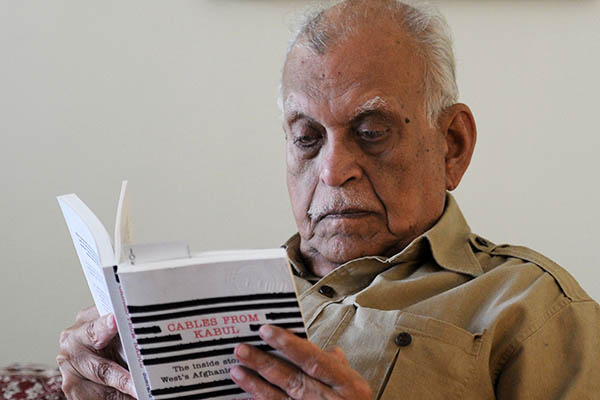 Jamil Ahmad, aged 83, suffered a heart attack while at home in Islamabad.

Jamil Ahmad, the author of an acclaimed collection of short stories about life in Pakistan’s tribal badlands, has died after a long illness, his family said on Monday.

Ahmad, a career civil servant, found fame as a writer late in life with The Wandering Falcon, which drew heavily on his experiences as an administrator in Pakistan’s desolate border areas with Afghanistan and Iran.

The book, shortlisted for Asia’s top English-language literary prize in 2011, captures the raw romance—and brutality—of Pakistan’s wildest terrain in the years before the rise of the Taliban.

Ahmad died at his home in Islamabad, aged 83, said his son Taimur Aziz. “He was not well and was bedridden for the past three months and had become very weak. He had a heart attack on Saturday and passed away,” Aziz said.

Seduced by tales of “cowboys and Indians” as a schoolboy, Ahmad quickly developed a lifelong passion for the way of life in Pakistan’s Balochistan province, and the tribal areas along the Afghan border in the northwest.

In an interview with AFP in 2011, Ahmad said he saw tribes as the earliest building blocks of humanity. “There’s a tribal gene somewhere embedded in each one of us,” he said.

Ahmad joined the civil service in 1954 and later became commissioner of Swat, a northwestern district where Pakistani forces in 2009 led a major operation against a Taliban insurgency. He later held the same post in Waziristan, today the scene of a major Army offensive against the Taliban and other militants.

The Wandering Falcon, hailed by Kashmiri writer Basharat Peer as “one of the finest collections of short stories to come out of South Asia in decades,” almost never saw the light of day. After his wife Helga dismissed his efforts at poetry as “rubbish,” Ahmad turned to write about the tribal world he knew intimately. The result was a manuscript finished in 1974 and tucked away in a drawer.

Helga, “like a bulldog,” kept showing it to people over 20 years. Then Ahmad’s brother heard a short story competition on the radio, called up Helga for a photocopy and submitted the draft, which attracted local attention and ultimately wound its way to the publishers.

The book is a collection of gently interlinking short stories, all but one featuring Tor Baz, a boy born to a couple who elope. He becomes the “Wandering Falcon” after his parents are killed. Ahmad is survived by his widow Helga Ahmad, two sons and a daughter.