Home Scope ‘We Did Not Process Him’

‘We Did Not Process Him’ 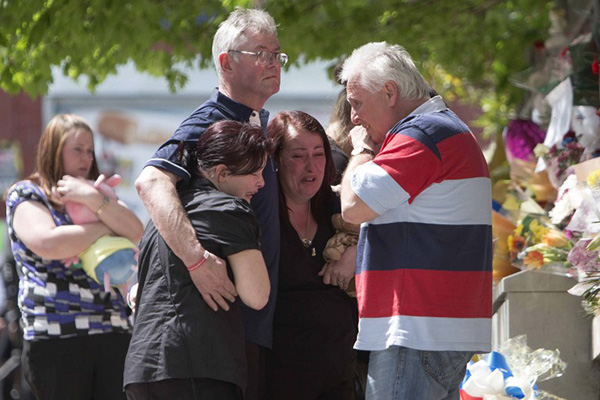 Lee Rigby’s family mourns at the site of his attack. AFP

One of the suspects in the brutal murder of a soldier in Britain was arrested in Kenya three years ago and questioned over alleged links to Islamist insurgents, the Kenyan government confirmed on Sunday, as soldier Lee Rigby’s family visited the site of the attack to mourn their loss.

Michael Adebolajo was detained in 2010 but was handed over to British intelligence agents and deported because there was insufficient evidence to charge him, authorities said. “He was arrested under a different name, a fake name,” according to government spokesman Muthui Kariuki. “We did not process him, he was handed over to the local MI5.”

A Kenyan antiterrorism police officer said Adebolajo was arrested over links to Shabab insurgents. The Shabab are an Al Qaeda-linked group fighting in Somalia, but with ties in neighboring nations including Kenya’s Indian Ocean coastal region.

The officer, speaking on condition of anonymity, said Adebolajo had been in contact with other suspects that Kenyan police were tracking in the port city of Mombasa. “There was no evidence to nail him so he was released. He was interrogated both in Mombasa and Nairobi,” the officer added.

The Kenyan government, meanwhile, rejected allegations that he had been physically assaulted while being held. On a video of his court appearance in Mombasa in 2010, Adebolajo can be heard saying: “These people are mistreating us, we are innocent.”

The government spokesman said “senior members of the intelligence community … denied knowledge of the torture ordeal.”

Reports in Britain said Adebolajo was detained on the island of Pate, a few kilometers away from a crossing point to Somalia.

Adebolajo’s brother-in-law claimed on Sunday that Britain’s perceived lack of concern despite “clear proof that he was being tortured … violently and sexually” while detained had radicalized him. “He was a lot quieter and quite bitter towards the fact that he wasn’t getting any help from anyone,” the relative told ITV News.

The disclosure raises fresh questions about the monitoring of Adebolajo and the other suspect in the murder, 22-year-old Michael Adebowale. It has been reported that both were previously known to Britain’s intelligence services, but neither were considered a risk to life.

Adebolajo was captured on video carrying bloodied knives and a meat cleaver after Wednesday’s attack, saying he had killed off-duty soldier Lee Rigby because British troops were killing Muslims.

The two men accused of running over Rigby with a car before hacking him to death remain under armed guard in separate hospitals after they were shot by police at the scene. Police arrested a 22-year-old man in London on Sunday on suspicion of conspiracy to murder and were still holding three other men in their 20s who were detained on Saturday on the same charge.

Both the suspects in the murder are Muslim converts from Nigerian Christian families, raising fresh concerns in Britain about the radicalization of young men.

Home Secretary Theresa May, the interior minister, warned there were “potentially” thousands of people at risk of being radicalized and said that “all the indications” pointed to last week’s attack being a lone wolf-style incident. She set the scene for a political row after calling for the resurrection of a bill that would oblige Internet service providers to keep records of messages sent and received online. The plans were previously dropped due to objections from the Liberal Democrats, the coalition government’s junior partner.

The distraught family of Lee Rigby, meanwhile, visited the scene of his murder near his barracks in Woolwich, southeast London, and added their bouquets to an ever-growing pile of floral tributes at the scene. One of his sisters, Sara, left a picture of the entire family with a bottle of HP sauce and a note: “Your favorite.”

The 25-year-old soldier is survived by a wife—who he had separated from—a 2-year-old son, and a fiancée. He had previously served been deployed as a machine gunner in Afghanistan. According to friends, he was considering leaving the Army to spend more time with his son when he was murdered.