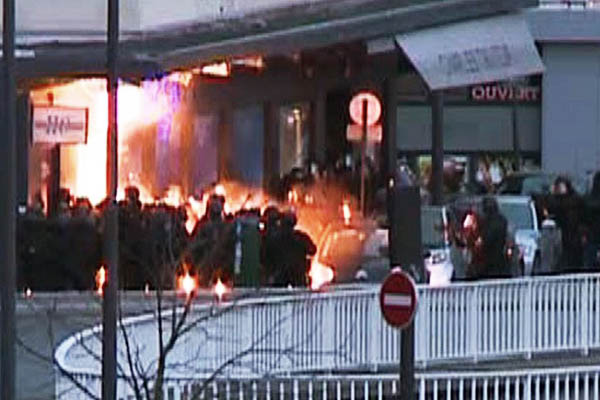 A screengrab shows French police launching an assault on a kosher grocery store occupied by an assailant on Jan. 9. Gabrielle Chatelain-AFPTV—AFP

Militants in Syria are planning “mass casualty attacks” on Western targets, the head of British spy agency MI5 has warned, saying the deadly shooting in Paris was only a reminder of an ongoing threat.

Security Service chief Andrew Parker was referring in particular to a group of fighters known as Khorasan, sources said, who have been targeted by U.S. warplanes in strikes in northwest Syria. He warned that intelligence agencies needed more powers, in particular to intercept communications, but added: “We know that we cannot hope to stop everything.”

Parker was speaking late on Thursday, a day after gunmen stormed the offices of French satirical magazine Charlie Hebdo in Paris and killed 12 people. He said the origins or details of the attack remained unclear, but it was a “terrible reminder of the intentions of those who wish us harm.”

Speaking of the broader threats, he said the number of “crude but potentially deadly plots” had increased, citing last year’s attacks in Canada and Australia, and were particularly hard to detect. Meanwhile the “complex and ambitious plots” carried out by Al Qaeda in the past still existed, he told the RUSI defense and security think-tank in London. These included “attempts to cause large scale loss of life, often by attacking transport systems or iconic targets.”

In August, Britain raised the national threat level to “severe”—the second highest of five levels—meaning that an attack is considered “highly likely.”

This was primarily due to the rise of the Islamic State militant group in Syria and Iraq, where an estimated 600 Britons have gone to fight, Parker said.

The MI5 chief added: “We know, for example, that a group of core Al Qaeda terrorists in Syria is planning mass casualty attacks against the West.” He is understood to be referring to the Khorasan group, which had been an obscure cell until U.S. intelligence officials called attention to it in September.

U.S. officials say the group includes Al Qaeda operatives from Afghanistan and Pakistan who made their way to Syria, although experts caution they are not a distinct group but are part of Al-Nusra Front, Al Qaeda’s Syrian branch.

Raffaello Pantucci, an expert in international security at RUSI, said that despite the apparent changing nature of recent attacks, the old threats do not go away. “So while we have seen a surge in this kind of lone actor-type thing, we’ve also still got a lot of people trying to plan big attacks,” he told AFP. “The fact that we haven’t had a successful one does not mean that people aren’t plotting to do that.”

Security has been stepped up at ports following the Paris attack, but Parker said more powers were needed for the security services—an issue that is of ongoing and heated debate in Britain, as elsewhere. “My sharpest concern as director general of MI5 is the growing gap between the increasingly challenging threat and the decreasingly availability of capabilities to address it,” he said.

A previous bill to force companies to keep data about people’s social media activity, calls and texts for a year was dropped over divisions in the coalition government. But another law was published in November that would oblige Internet service providers to hand over data on Internet Protocol addresses to trace individual smartphone and computer users.

“In the modern world they communicate through the Internet, through email, through social messaging and all the technical ways that we are aware of,” the former foreign and defense secretary told BBC radio. “So our intelligence agencies, acting under law, acting on good reasonable grounds, with authority, have to have the power to intercept particularly international communications that might be relevant.”

French Prime Minister Manuel Valls made a similar point Friday, saying: “It will be no doubt necessarily to take new measures” to respond to the terror threat. France has invited ministers from other European countries and the United States to Paris on Sunday to discuss their common security challenges.