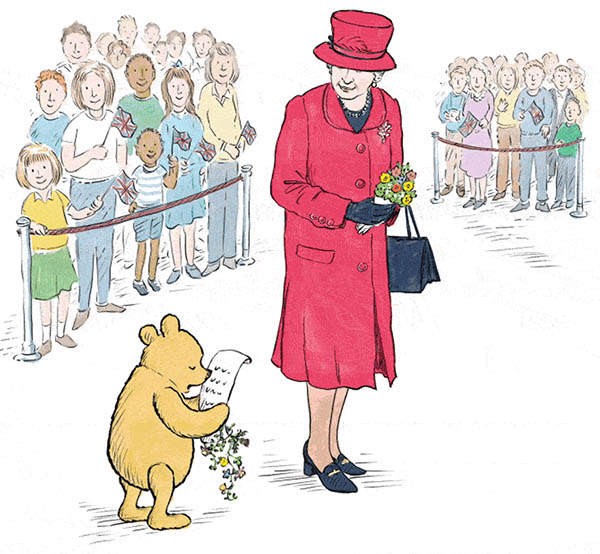 Winnie-the-Pooh meets Queen Elizabeth II and a little boy who looks just like her great-grandson Prince George in a new story published Thursday to mark both their 90th birthdays.

A.A. Milne’s honey-loving bear, who first appeared in a story in 1926, the year of the queen’s birth, travels to London with Christopher Robin, Piglet and Eeyore the gloomy donkey to give the monarch a birthday “hum” or poem. They meet her by chance outside Buckingham Palace, where she is holding the hand of an unnamed young boy, described as “almost as bouncy as Tigger” and looking remarkably similar to Prince William’s son George.

Winnie-the-Pooh famously tried to see the king in the poem Buckingham Palace, but he was “much too busy a-signing things.” They watched the changing of the guard, and then went home for tea.

Winnie-the-Pooh and the Royal Birthday was written by Jane Riordan with illustrations by Mark Burgess, who also drew the pictures for Return to the Hundred Acre Wood in 2009, the first authorized book since Milne’s death. It is free to download from the Disney website and there is an audio version narrated by Oscar-winning actor Jim Broadbent, who said it had been “an honor” to record.

“I have been a fan of Winnie-the-Pooh since I was a boy, in fact I named my very first and much loved teddy Pooh, and that can only have been after the A.A. Milne character,” he said in a statement. The queen was also said to enjoy the Pooh tales as a child.