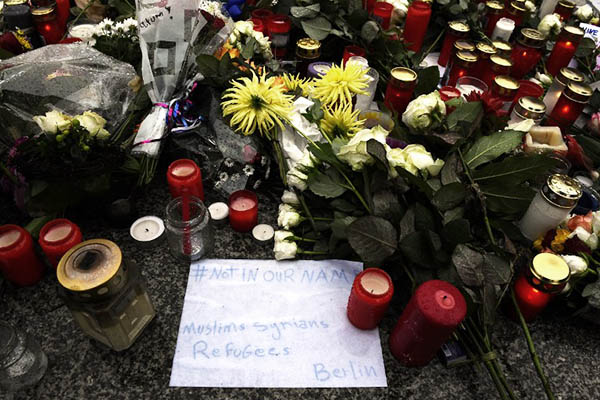 Leading Islamic organizations across the world have condemned the Paris attacks.

In Pakistan it was the parents: men and women who watched their children die in extremist attacks who were generous in their own grief, reaching out across the world to tell the survivors of Friday’s nightmare in Paris that they are not alone. In Afghanistan, torn apart by decades of war and a bloody insurgency, Muslims took to social media to change their profile pictures to the French tricolor, despite the fact that Facebook had no Afghan flag filter for when their own lives were shattered by bombs and guns.

Muslims across the world have condemned the attacks on Paris in a heartbreakingly empathetic response that has been sustained over the six days since gunmen killed 129 people in a bloody jihadist rampage across the City of Light.

“I want to tell the French they are not alone,” chemistry teacher Andalib Aftab told AFP tearfully this week. Aftab lost her 16-year-old son in Pakistan’s deadliest ever extremist attack, a Taliban massacre at a school that killed more than 150 people, mostly children, in December last year.

But bitterness and despair have surfaced too, from those who live every day with the horror now gripping France. “We have tasted death for many years,” Iraqi Samara al-Qaisi wrote on Facebook. “We have been watching horror movies in Iraq; we have tasted this for 12 years, and no country moved to help us,” she said. “Why do we have to show this strong sympathy with the French people, while our people are being slaughtered by terrorists on daily basis?” asked Afghan Facebook user Yousuf Omar. “Do they show this kind of sympathy with us?”

The bitterness is undercut by anguish, however, and there has been no outpouring of anger as there was in the aftermath of January’s attack on the Paris offices of satirical magazine Charlie Hebdo. That attack, prompted by the magazine’s controversial cartoons of Islam’s Prophet, spurred protests by Muslims angered by what they saw as Charlie Hebdo’s blasphemy—including in India-administered Kashmir.

This time, hundreds in the region condemned the wave of attacks in Paris, with hardline leader Syed Ali Shah Geelani saying the “killing of innocents in the name of religion is in no way justifiable.”

European Muslim leaders were also united in condemning what Turkey’s top cleric Mehmet Gormez said in an open letter to G20 leaders was “not an attack on France, on Europe or on the West; it is an attack on every human being that cherishes world peace.” Bosnia’s Grand Mufti Husein Kavazovic, spiritual leader of the country’s roughly 1.5 million mostly-moderate Muslims, branded the attacks “a sin towards God.” And Germany’s eight biggest Muslim associations in a joint statement condemned the Paris violence as “vile and barbaric attacks.”

In Britain, the Muslim Council took out an ad in the Daily Telegraph and the MailOnline declaring: “With one voice, British Muslims condemn the Paris attacks unreservedly,” and announced a vigil in London using the hashtag #MuslimsStandWithParis. #NotInMyName, a hashtag that first went viral in January during the Charlie Hebdo attacks, also resurfaced in Europe and Asia.

“The coward terrorists don’t represent me or my religion,” wrote Kabul civil activist Omaid Sharifi, who also updated his cover photo with #NotInMyName.

Many others tweeting using the hashtag attached the Quranic verse that reads: “Whoever kills an innocent person, it is as if he had killed all of humanity.”

Some Muslims using the hashtag expressed frustration at the fact it existed at all. “When white American men commit mass murder, shoot up movie theaters, schools and workplaces they are never asked to tweet #NotInMyName,” wrote Twitter user Rosa A Clemente.

The sentiment was perhaps best expressed in a video by a five young Pakistani comedians that swiftly went viral in the country. To the music of John Lennon’s “Imagine”, and citing the Pakistan school attack and statistics that show Muslims are the biggest victims of terrorism globally, they tell Parisians they “completely understand what you guys are going through.” But they “can’t be apologetic.”

The group also said it was “easy” to blame Muslim refugees coming to Europe: “But you have to understand that they are running away from the same people who are carrying out these attacks.”

“Trust me, the only time an average Muslim is frustrated… is when Nutella is out of stock,” the video joked. “In all honesty… We’re the same people as you. We have the same fundamental problems as you have. We have the same hopes, dreams and ambitions as you. And when we go to bed at night we fall asleep, hoping and praying to wake up to a better world, for all of us.”