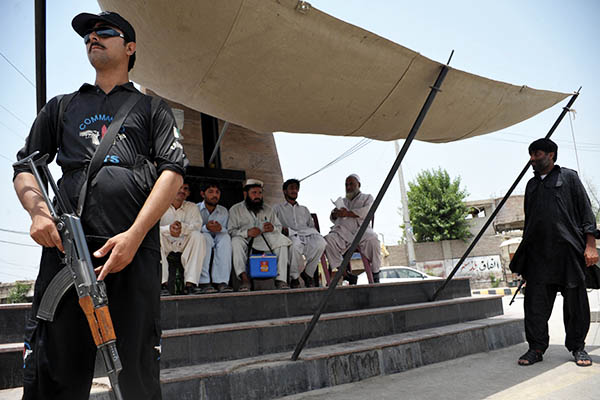 Pakistan’s National Institute of Health confirms that number of children infected with the poliovirus so far this year has crossed 100.

Pakistan’s National Institute of Health (NIH) on Thursday confirmed that three new cases of poliovirus had been discovered, raising the total number of infected so far this year to 102, compared to 91 in all of 2013.

“The number [of people infected with polio] has crossed 100, and the rapid increase of polio cases right now is due to the ongoing militant insurgency across the country, and the killing of polio workers and their security details in areas with high density of polio cases—such as North and South Waziristan, Khyber Agency, central Khyber-Pakhtunkhwa province and Karachi,” said Dr. Altaf Bosan, the coordinator of the national polio program.

He said the government was attempting to address this by providing additional security to health workers, and by setting up polio vaccination booths at security checkpoints in the northern areas.

The Prime Minister’s Polio Monitoring and Coordination Cell has warned that polio in Pakistan cannot be eradicated until health workers are allowed access to children across the country, including the insurgency-hit tribal areas. Polio vaccination campaigns, conducted several times a year in the rest of the country, have been suspended in North and South Waziristan since June 2012 due to the security threat. Due to this, according to the cell, 75 of the 102 cases reported so far this year have originated from the tribal areas.

Bosan said the military’s Operation Zarb-e-Azb, launched in June against militants in North Waziristan, was a blessing in disguise for the children of the region. “The government has made special arrangements to ensure the children fleeing North Waziristan are vaccinated at security checkpoints,” he said, adding, “Over 600,000 children have been vaccinated since the operation started.”

Dr. Zubair Mufti, the World Health Organization’s National Surveillance Coordinator for Polio Eradication in Pakistan, agreed with Bosan’s opinion, but said the military operation had also increased the risk of the virus spreading beyond the tribal areas.

“Following the exodus, there is a risk that the virus could spread to the rest of the country,” he said. “But this can be mitigated by maintaining a high level of protective immunity across the country and among the displaced community through vaccination,” he told Newsweek. He said the virus had been found primarily in the tribal areas, Karachi and Peshawar due to the reduced range of the polio vaccination campaigns conducted in 2013.

Pakistan is one of only three countries in the world where polio remains endemic. The other two are Nigeria and Afghanistan.

“If everyone in Pakistan is accessible to health workers for a consistent period of six months,” said Mufti, “we can achieve polio eradication.”