Home Latest News A Comeback for the Afghan Scouts

A Comeback for the Afghan Scouts 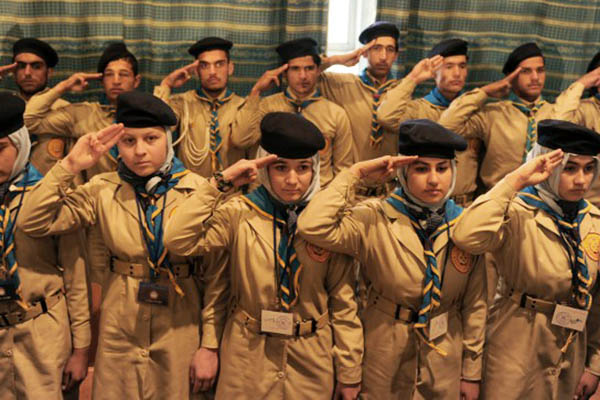 In his blue cap and green Scouts shirt, 16-year-old Aref Qasemi sits in a room in Kabul with dozens of other boys and girls, his eyes barely making it over the shoulders of his fellow Scouts. Under the dim lights they at first appear like any other giggling Scout troop. Then the subject of the bright images projected on the wall sinks in: mines, of different shapes and sizes, and other pieces of unexploded ordnance.

Aref and his friends are not learning how to kayak or build a campfire, the usual things learned by Scouts in other countries, but how to identify and avoid these deadly, brutal weapons. Millions of mines, improvised explosive devices (IEDs) and other pieces of ordnance are scattered across Afghanistan, the legacy of more than three decades of war. They kill and maim dozens of people each month, according to U.N. data—including, disproportionately, curious children at play.

“I once witnessed two of my friends killed when they picked up a piece of [unexploded ordnance], thinking it was a piece of metal they could sell,” Aref says. “Learning how to identify and deal with mines is very important. These lessons might one day save my and my family’s life.”

Scouting has a long and proud history in Afghanistan, where it was first initiated in 1931, says national training commissioner Gul Ahmad Mustafa. Things however fell apart during the Soviet occupation of Afghanistan in the 1980s, followed by civil war and Taliban rule, when traditional scouting was banned.

But in 2010 international aid organization PARSA, which works to help children and women in Afghanistan, began attempts to revive the movement, training troops of boys and girls first in remote Ghor province and in orphanages in Kabul. Today more than 400 leaders have been trained and some 2,000 Scouts are active in 13 out of 34 provinces, according to Mohammad Tamim Hamkar, the Afghan program’s manager.

Like fellow Scouts worldwide, they play games, learn first aid and field crafts—but, lacking funds and facing spiraling violence and insecurity, adventures such as camping and hiking are all but impossible.

Sometimes even simple misunderstandings can put people in danger in Afghanistan’s ultra-conservative culture. Some years ago a campfire sing-a-long in Kabul had to be abruptly halted after mullahs accused the children of worshipping fire, says Hamkar. “We were forced to show the mullahs our training manuals, and argue to convince them a campfire doesn’t mean worshipping fire or blasphemy,” the 34-year-old adds.

At times the children are associated with police, a dangerous perception in a country where law enforcement—accused of many rights abuses and widely distrusted—are regularly targeted by insurgents.

Earlier this month more than 30 young police cadets were killed in a suicide attack just a few miles from where Aref’s scout troop was meeting. The mistake stems in part from the 1970s and 80s, when scouting’s local Pashto name—‘Sarandoi’—was adopted by law enforcement.

“While scouting can thrive when supported by people, some here are taking our boys for police, thinking we are part of the interior ministry,” Hamkar said.

There are rays of light too, however. In a nation plagued by decades of violence and rampant drug use, scouting gives some young people a path. “I have learned a lot from being a Scout—discipline in life, self-reliance and how to help others,” says 15-year-old Ehsanullah. “But to learn how to be a good person, avoid violence and keep away from drug use is what matters,” he says.

It also provides a rare path for girls, who Hamkar says make up nearly 40 percent of Scouts nationwide. While troops are segregated by gender, the sexes do mix for important subjects like mine awareness.

The perception of Scouts in the country is slowly improving, Hamkar says. “We have been having TV shows on the importance of scouting, to change the wrong impression about scouting.”

“Sometimes when I see people praise our boys for contributing to society, it brings back memories of good old times, when scouting was hailed as a good and accepted part of the culture,” Mustafa the training commissioner says.

He pauses, then adds: “But we are determined. Even if it requires the patience of the Prophet Ayoub [Job], we will do it. We will get there.”