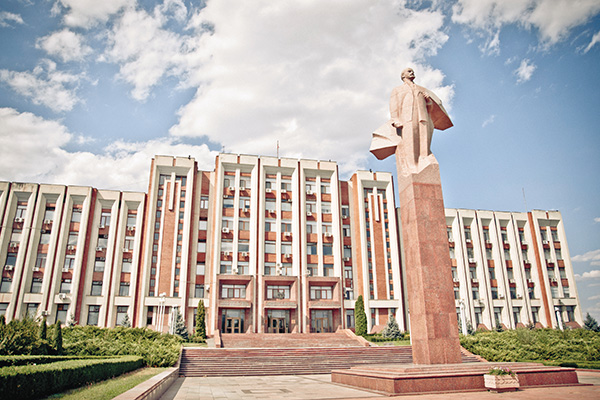 Welcome to Transnistria, the place that time forgot.

[dropcap]O[/dropcap]ur van slows under a large red and green banner embossed with a gilded hammer and sickle. We had left Chisinau, Moldova’s capital, at sunrise, and after more than two hours of negotiating road construction and donkey-pulled carts, we arrive at a border. Several cars jockey for a position in front of a rusting gate, where men hand over bottles of vodka to uniformed guards—an unspoken bribe.

“Welcome to Transnistria, the Soviet museum,” my Moldovan guide, Sergiu Ghetiu, announces as our van slides through the iron girders.

Best described as a non-nation, Transnistria, formally known as the Pridnestrovian Moldavian Republic, is a breakaway territory occupying a sliver of land about the size of Delaware between Moldova’s Dniester River and Ukraine. With a predominance of ethnic Russians and Ukrainians during the early part of the 20th century, the area was absorbed into the Soviet Union following the Second World War. When the dust settled after the collapse of the U.S.S.R., Transnistria, which had never been bonded to Moldova by political or ethnic ties, suddenly found itself within Moldova’s borders.

Increasingly ethnocentric Moldovan laws ignited the short War of Transnistria in the spring of 1992, during which Transnistrians (still mostly of Russian and Ukrainian descent) rebelled. Today, with a Russian military presence intermixed with the local militia, Transnistria remains a conflict zone with no peace accords signed.

A paper stamped at the border with the time 19:27 dictates how long I have to explore this non-nation frozen in time: 10 hours. Our first stop is in Transnistria’s capital of Tiraspol, at a drab building with air conditioners sagging out of the windows—the so-called Parliament house. Although essentially divorced from the rest of Moldova, Transnistria has been targeted as a tourism asset and a way to jumpstart the predominantly agrarian economy of landlocked Moldova (in fact, my guide, Ghetiu, is Moldova’s minister of agriculture). Following a stimulus package from USAID in 2012, Transnistria recently eased its borders, and my group is among the first Western journalists to bear witness to the developments in local infrastructure. But all that can be seen around the Parliament are wide, clean, and barren streets. Tenement housing looms in the distance; and a towering statue of Lenin casts a long shadow on our van.

The next stop on our tour seems geared toward giving us a local taste, so to speak, of Transnistria. KVINT, the local distillery, is housed in a building indistinguishable from the surrounding tenement towers of Tiraspol. The manager, a tall man with a buzz haircut and drooping belly, pours our first tasting, which includes a “cognac for men” and a “cognac for women.” Though I prefer the latter, I push it aside to feign interest in the former’s “complex taste,” despite thinking it would make a suitable alternative to acetone.

Though the cognac has left something to be desired, the nearby valleys of Tiraspol provide a swath of arable land for grapes that yield surprisingly enjoyable wine. Swirling a glass of red, I ask the manager, “What would you pair with this?”

“Nice clothes,” he says, without a hint of irony. “Nicer than the ones you are wearing.” I’m in a polo shirt, while he’s dressed in all white, like a Soviet Colonel Sanders, down to the black string tie.

Without a spittoon in sight, we’re soon told unceremoniously to finish our tipples before leaving to take our lunch at Noul Neamt (or Novo-Nyametsky in Russian), the region’s largest place of worship. Founded in 1861, the bucolic campus near the town of Tighina was used as a tuberculosis hospital under the U.S.S.R. but was reclaimed by Eastern Orthodox Christians in 1990.

Lunch is a serving of cucumbers and fish-head stew, with homemade wine. “It’s the elixir of life!” Ghetiu says about our drinking-themed tour. I resign myself to another glass and what’s beginning to seem like Transnistria’s non-national pastime. After lunch, true to form, we wander down to a stone-lined cellar and crank the knobs on several more barrels, sharp and unrefined compared with the wine we had at KVINT.

A paper stamped at the border with the time 19:27 dictates how long I have to explore this non-nation frozen in time: 10 hours.

As we approach the government-sanctioned witching hour, we’re shuttled back to Tiraspol, where the most pronounced development in Transnistria’s local tourism is unveiled. Hotel Russia is, as the name suggests, targeted at visitors from the “motherland.” According to Ghetiu, Transnistria subsists through funds from Sheriff, the non-nation’s commercial monopoly that runs the gas stations, supermarkets, and other businesses—not to mention an immaculate football stadium for a team that dominates its neighboring countries. Ghetiu gingerly drops the word “mafia,” but everyone has their own theories on the degree of cronyism at play. The money, they say, is Russia’s way of preserving the prosperity of those linked to the motherland by blood and to further paralyze Moldova’s economy by restricting its energy assets.

While the rest of the group is ushered to the rooms, which, they are assured, meet an international standard of hospitality, I linger in the marble lobby, mesmerized by the caviar vending machine in which dozens of jars are illuminated by a warm purple glow. I wait nearby, hoping someone will splurge on some roe to go, before realizing I haven’t seen a single guest at the hotel. How would I, when we’re all required to leave Transnistria by 19:27?

Back in Moldova and without a passport stamp to mark my journey, the only souvenirs from my time in the non-nation are the rubles I got before departing. I take the bills out of my pocket to find what turns out to be a quaint catalog of my visit: the KVINT distillery on the 5, the monastery on the 10 piece, and the Parliament on the 50. The only thing missing is any marking of Sheriff.