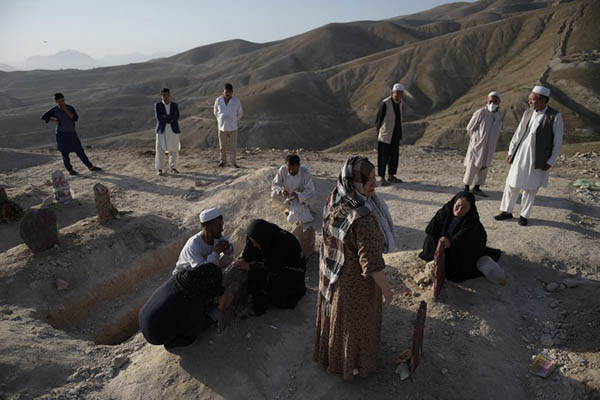 A double tragedy befell an Afghan family when a policeman was killed in twin Taliban blasts in Kabul—and unable to cope with the anguish, his mother also died.

Ahmad Salangi, in his mid-forties, was among 41 people killed in the double bombing during rush hour near the defense ministry on Monday. Eager to cushion the shock, relatives of the police commander’s elderly mother, adoringly called Bibi Haji, lied to her that he was still alive.

“My mother was waiting by the door, waiting for news about Ahmad but I wanted to soothe her anxiety. I mumbled something, trying to hide the terrible news,” said Sayed Agha, his younger brother. “But I could not hide it much longer.”

The mother-of-six put on a brave face and tried to assuage Sayed’s grief. “I have already lost two sons and I am familiar with the pain,” Sayed quoted Bibi Haji as saying.

One of her sons, a mujahideen fighter, was killed battling the Taliban and another died of an illness. But soon Bibi Haji fell seriously ill, slipping into unconsciousness, and was rushed to hospital. Barely half an hour later she was pronounced dead.

“I knew she could not stand the pain of losing another son,” Sayed Agha said, choking back tears.

Their funeral was carried out together in their native Parwan province, north of Kabul, on Tuesday, which was attended by her extended family and government officials. “We have seen many tragedies but when we saw their two coffins lying together we could not hold back our tears,” said 29-year-old Farid Salangi, Ahmad’s cousin.

The family’s grief spotlights the plight of ordinary Afghans, increasingly caught in the crosshairs of a lethal insurgency as Afghanistan’s wrenching conflict grinds on. Behind the grim statistics highlighting death and growing insecurity are ordinary people with harrowing tales of suffering and loss.

“This is a country where tragedy is not uncommon,” said Sayed Agha. “I have already lost two of my brothers, and today I feel the deep agony of seeing my mother die of pain after hearing of her son’s death.”

The twin blasts, which also left 110 people wounded, was one of the worst episodes of violence in the capital. Ambulances were overwhelmed by the carnage outside the defense ministry. There were so many disfigured bodies that some had to be taken to hospitals in car boots and the back of police trucks.

Firemen raced to retrieve some bodies thrown into the Kabul River by the force of the blast. Later Monday, militants attacked charity CARE International in Kabul in an hours-long assault labeled a “war crime” by Amnesty International.