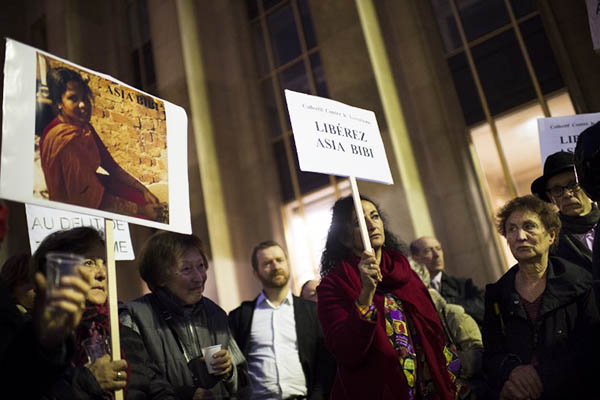 Ashiq Masih has urged President Hussain to allow his wife and family to leave for France.

The husband of Aasia Bibi, a Pakistani Christian woman sentenced to death for blasphemy four years ago, has written to President Mamnoon Hussain to ask for her to be pardoned and allowed to move to France.

Aasia Bibi has been on death row since November 2010 after she was found guilty of making derogatory remarks about Islam’s Prophet during an argument with a Muslim woman. The Lahore High Court confirmed the death sentence last month, dashing hopes it might be commuted to a jail term.

“We are convinced that Aasia will only be saved from being hanged if the venerable President Hussain grants her a pardon. No one should be killed for drinking a glass of water,” her husband Ashiq Masih wrote in an open letter dated Nov. 17 and published by The New York Times.

Paris mayor Anne Hidalgo has said the couple are welcome in the city, and Masih quoted his wife as saying she sent her “deepest thanks to you Madame Mayor, and to all the kind people of Paris and across the world.” Masih added his wife was not guilty of blasphemy.

The plea for being allowed to move to Paris comes days after the mayor of the city Anne Hidalgo requested President Hussain to grant her a pardon. Senior opposition leader Bruno Retailleau on Wednesday asked French President Francois Hollande to intervene in the case.

Blasphemy is a hugely sensitive issue in Pakistan, with even unproven allegations often prompting mob violence.

Masih, 50, lives in hiding with two of his five children and has to keep his identity secret as he scrapes together a living as a daily laborer. He visits his wife once a month, making a five and a half hour journey to her jail in Multan.

Amnesty International has raised “serious concerns” about the fairness of her trial and has called for her release. Former Punjab governor Salmaan Taseer had also appealed for her release and proposed reforms the country’s blasphemy laws, for which he was assassinated by his own bodyguard.

Pakistan has never executed anyone for blasphemy and has had a de-facto moratorium on civilian executions since 2008. But anyone convicted, or even just accused, of insulting Islam, risks a violent and bloody death at the hands of vigilantes.

In the absence of concrete evidence a pardon is necessary.

Attacking the weakest and most vulnerable under the guise of piety is not cool. Let the poor, miserable family alone. “Pardon” her Mr. President and may Allah have mercy on you.

I have never read the Koran, but it is commonly known that Islam affords assent and even concurring levels of honor and veneration for the same prophetic and historically signifigant figures of Judeo-Christian faith. Even such as Moses, Abraham and Jesus- the Nazarene. ( Ù ) May such as are scholars of the Koran, search out their scriptures to find and retell of truths as are the moral absolutes common to all peoples who hope for the good of all. Love. Justice. Mercy. Love of God and neighbor, friend or foe. Justice for all, the least as first. Mercy- the highest might and signet of Kings, Presidents, Rulers, Chieains a nd lords. Mercy from the hand of one who rules will always excell the hands of thugs who can only oppress and take away. Mercy calls to a higher power the thug does not possess. We must ask- Where are the true Islamic scholars of the Koran? We can see and have empathy for the reluctance to expose themselves to madmen with the Koran in one hand and AK47 in the other. Such as it is, there remains a greater good to be gained, and hope to be had by seeking to kmow more about what we share in common than what only divides us more and more.