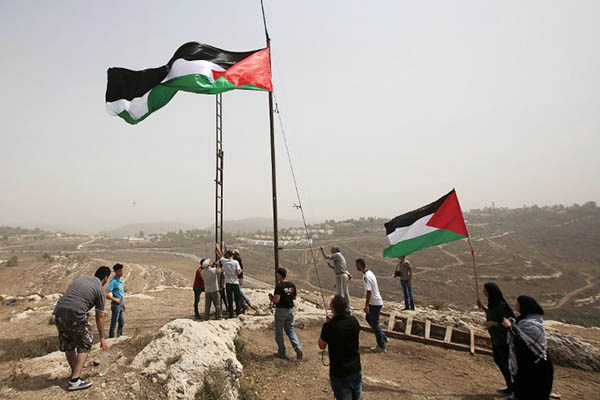 Palestinian President Mahmud Abbas on Friday praised the countries that sided with “justice” by voting for the Palestinians to be allowed to raise their flag at United Nations headquarters.

The U.N. General Assembly, by a two thirds vote, adopted a resolution on Thursday allowing the flags of Palestine and the Holy See—both of which have non-member observer status—to be hoisted alongside those of member states.

Abbas paid tribute to the countries that approved the resolution saying “they have placed themselves on the side of right and justice,” the official Palestinian news agency Wafa reported. “The struggle will continue until the Palestinian flag flies over our eternal capital, occupied Jerusalem,” said Abbas.

The flag is expected to be hoisted ahead of a Sept. 30 visit by Abbas to address the U.N. General Assembly—which upgraded the status of Palestinians to that of non-member observer in November 2012.

Thursday’s resolution was adopted by 119 members while eight—including Israel and the United States—voted against and 49 abstained.

Israel’s U.N. ambassador, Ron Prosor, criticized the decision saying “it will not help the Palestinian people” and insisting the “only way to achieve statehood is through direct negotiations.”

The latest round of U.S.-brokered peace talks between Israel and the Palestinians broke down in April 2014. Israel seized east Jerusalem in the Six-Day War of 1967 and later annexed it in a move never recognized by the international community.