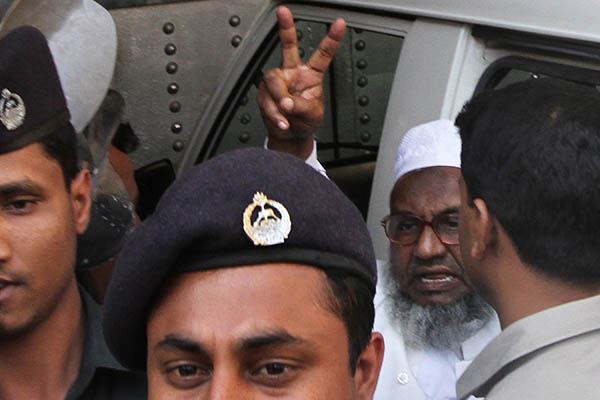 Bangladeshi JI leader has exhausted all legal processes and will not be seeking a presidential pardon.

A Bangladeshi Islamist leader convicted of mass murder and rape during the country’s 1971 independence war against Pakistan will be hanged just after midnight Tuesday, officials said.

“He will be executed after 12:01 p.m. tonight as all legal processes have been exhausted,” said Bangladesh’s deputy law minister Quamrul Islam, referring to Abdul Quader Molla. “In the presence of two magistrates he was asked whether he would seek pardon from the president and said ‘no’.”

Prisons chief Main Uddin Khandaker said all preparations have been made to carry out the execution, and Molla’s family have been asked to meet the 65-year-old senior leader of the Jamaat-e-Islami party for the last time.

On Sunday, a tribunal signed an execution order for Molla, and sent it to the main jail in the capital Dhaka, raising speculation that the former journalist could be hanged any moment.

New York-based activist group Human Rights Watch and a U.N. Special Rapporteur on the independence of judges and lawyers have warned that by executing Molla without giving him the opportunity to appeal for a review, the country could be breaking international law.

There are also worries the execution could trigger more violence in the restive nation, already reeling from its worst political unrest since independence ahead of a national election on Jan. 5. At least 224 people have died in battles between opposition protesters, police and government supporters since January this year.

“What logic do they have to stop the execution?” asked minister Islam when asked about the criticism from rights experts. “Did they stop the execution of Saddam Hussein?” he added, referring to the former Iraqi dictator who was hanged in December 2006.

Molla was convicted of rape, murder and mass murder including the killing of over 350 unarmed Bengali civilians. Prosecutors described him as the “Butcher of Mirpur,” a Dhaka suburb where he committed most of the atrocities.

A domestic war crime court had originally sentenced him to life imprisonment in February, but the sentence prompted protests by tens of thousands of secular demonstrators who viewed it as too lenient. Under pressure, the government amended the war crime law retroactively to allow it to appeal the sentence and seek the death penalty, which the Supreme Court then handed down in September.