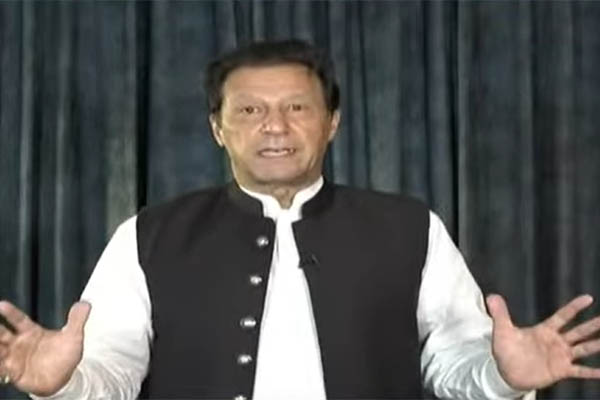 Screengrab of Imran Khan’s speech after the Punjab C.M. election

Supporters of the Pakistan Tehreek-e-Insaf (PTI) staged protests in various cities across Pakistan on Friday night after party chief Imran Khan urged them to take to the streets against Hamza Shehbaz’s victory in the election for Punjab chief minister.

The Pakistan Muslim League (Nawaz)’s Hamza was elected chief minister of Punjab in a run-off vote, defeating PMLQ’s Pervaiz Elahi, after Punjab Assembly Deputy Speaker Dost Mazari rejected 10 votes cast by the PMLQ by citing Article 63A of the Constitution. Announcing his ruling, he said the Supreme Court had ruled that votes cast against party instructions could not be counted in its recently issued interpretation of the clause.

Shortly after the election results were announced, PTI Chairman Imran Khan addressed his supporters and asked them to register their protest through “peaceful” demonstrations. Claiming he was in a “state of shock” after the election process, he said democracy had “meritocracy and transparency” but its foundation was based on “morality.” Appearing to link the process to the military he added: “Democracy does not have an army. Parliament does not have an army. The army is somewhere else. Parliament has one thing, which is morality,” he said.

Khan also reiterated claims that “votes were bought” and accused PPP leader Asif Ali Zardari for being responsible. “These [PTI rivals] are not politicians, they are mafia; they consider people sheep and goats. Shujaat [Hussain]’s letter alone is not effective, the decision rests with the parliamentary leader. Whatever happened today will further create economic uncertainty,” he claimed, adding that he had also experienced this, as he had written a letter directing lawmakers to vote for a certain candidate but this was only accepted after the parliamentary leader re-issued it.

“The nation should protest today, you have to tell them that we are humans, not cattle. Everyone should register their protest so that they know we are not sheep. They slaughtered the public mandate, and now all eyes are on the courts,” he said. “We will deal with them again and again, they will never let the country progress. As the rupee depreciates, their wealth will increase, their wealth is outside of country in dollars. We will not allow robbers to steal our mandate with stolen money,” he alleged.

In Karachi, PTI workers registered their protest at Shahra-e-Faisal. In Peshawar, PTI workers protested by blocking thoroughfares and setting tires on fire. They also raised slogans against the Punjab chief minister’s election and called for “independence.”

In Rawalpindi, the PTI gathered at Chandni Chowk, while similar demonstrations were organized in Multan and Faisalabad. The commonality of all protests was the shouting of slogans against Mazari’s ruling.