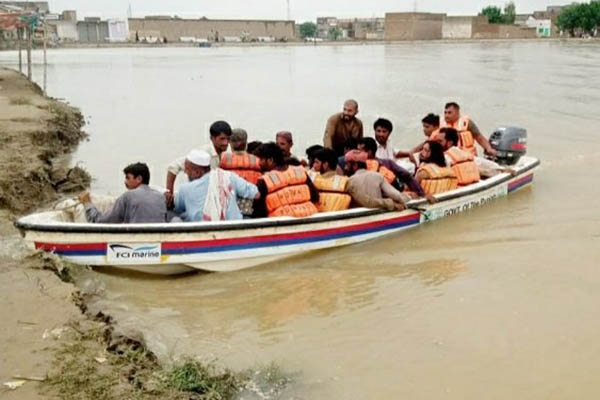 The role I expected the federal government to play—as an “elder brother” over the provinces—in this hour of need, appears to have been designated to former prime minister Imran Khan, who has announced he will host a telethon to raise funds, both locally and from abroad, for Pakistan’s flood affected areas. The chief ministers of Punjab and Khyber-Pakhtunkhwa—provinces in which Khan’s Pakistan Tehreek-e-Insaf (PTI) is in government—shall also accompany him in the 150-minute-long telethon set to commence at 9:30 p.m. tonight (Monday).

The destruction caused by this year’s floods has evoked memories of the 2010 floods, which had impacted nearly a fifth of Pakistan’s total land area, with Khyber-Pakhtunkhwa suffering the brunt of the devastation. However, unlike 12 years ago, this year’s destruction does not appear to have provoked the “unification” effect that defined the events of 2010. Back then, people who had remained physically unaffected by the floods either traveled to flood-hit areas for rescue and relief activities, or collected donations for displaced families. We all saw kids, women and even elderly couples from all walks of life contributing in whatever capacity available to them.

As someone from ‘Generation Y,’ I was not witness to the zeal and patriotism that earlier generations saw during the 1965 war. Therefore, my defining, and heart-touching, memory about the generous spirit of Pakistanis had always been the 2010 floods. Unfortunately, the 2022 floods have not provoked the same degree of national spirit, having been seriously ignored at all levels, including by the media. No one can deny that the media was more obsessed with the country’s political bickering, restricting coverage to Islamabad, Lahore and Karachi, even as more than half the country drowned. Our national news cycle kept its focus on the never-ending political chain, which helps it generate maximum revenue, while abysmally failing to provide a platform to the families displaced by the floods.

Even social media—traditionally seen as the most ethically weak platform—was late to the cause, but it stepped up, finally managing to draw some attention to the floods, diverting the public from political discourse to rescue and relief alarms. However, as evident from the magnitude of the loss, the government alone cannot deal with the crisis at hand. According to the Media Coordinator to Punjab C.M. Azhar Mashwani, 46,320 houses were partially or fully damaged in 6 districts of Punjab from June 15 till Aug. 26. Data shows floodwaters swept away 4,541 houses in Rajanpur—one of the most backward areas of south Punjab—alone, while over 20,000 houses were also partially damaged there.

The disaster doesn’t end here. Latest information from the Provincial Disaster Management Authority shows 168 lives have been lost in the province, and 105 injured. Around 450,083 people have been affected by floods in Rajanpur, Dera Ghazi Khan, Mianwali and Muzaffargarh, with the deluge also killing 0.2 million animals in Rajanpur, Dera Ghazi Khan and Mianwali; the majority from Rajanpur.

The flood has inundated 87 schools in Rajanpur and Dera Ghazi Khan, and damaged 115 roads and 12 bridges. It’s the biggest financial loss that any government of Pakistan has experienced in the past decade. As far as relief operations are concerned, the Punjab government is not only providing food hampers and flour bags, but also ensuring the provision of freshly cooked meals at rescue tents and designated spots. In addition to relief camps, around 30,000 tents have also been distributed. The district administrations in Rajanpur and Dera Ghazi Khan are providing blankets and plastic mats to the affected population, while the field force is trying its best to work with limited resources.

In Dera Ghazi Khan, Assistant Commissioner Saddar Shakaib Sarwar, in addition to deploying government machinery, has been rescuing people in his official vehicle. Footage shows him playing with flood-affected kids at temporary camps to lift their spirits and help them overcome their trauma. “Things on ground are diametrically opposite than things on paper or what is being shown on media,” he said. “One thing that needs to be understood by everyone is calamity of this magnitude can’t be managed by administration only, everyone needs to play their part as a nation. When in calamity egos must rest in peace. Saving lives and helping each other must take precedence over everything,” Sarwar added.

Going forward, the government, civil society organizations and multinationals operating in Pakistan must come together and play their part in the rehabilitation process. Responding to a question, Mashwani stated: “With Imran Khan leading the international telethon, we are hopeful that this apolitical cause shall help all the victims from all of our provinces.”

This is the time when we, as ordinary citizens, would like to see leaders from all of our political parties sitting together, strategizing and implementing relief and rehabilitation agendas without any point-scoring or blame-games. Furthermore, provincial governments should also develop an online library where details of all households, partially or fully damaged, should be uploaded. We need to give faces (obviously blurred) to the families that donors are going to support. Pakistan doesn’t need one-time grants because when the relief activities conclude, the country shall face an even bigger challenge i.e. rehabilitation. These detailed stories of affected families must include the number of family members, their lifestyles, how many of them were school-going, how many employed at a nearby hotel swept away by flash floods—all such details need to be put out there, so donors can come forward and adopt the welfare of these families by facilitating the restoration of routine life in the months to come.

Abbas is a freelance journalist and project director of Voice of Punjab. He has served as media adviser to the World Bank and UNICEF-funded Tourism and Healthcare projects in Punjab. He tweets @EAAgop