PTI Under Fire Over Leaked Audio on IMF Deal 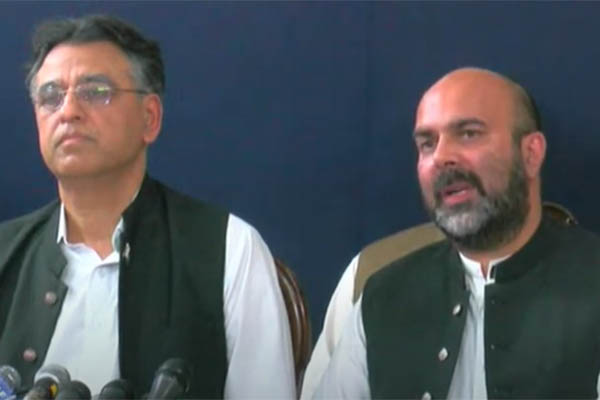 Leaked audio-tapes of Pakistan Tehreek-e-Insaf (PTI) leaders allegedly discussing means to withdraw commitments of the provincial governments of Punjab and Khyber-Pakhtunkhwa from the federal government’s bailout program with the International Monetary Fund (IMF) have raised questions over the opposition party’s apparent bid to push the country into an economic crisis.

On Monday morning, two audio tapes were leaked to media. In the first, PTI Senator Shaukat Tarin allegedly asks Punjab Finance Minister Mohsin Leghari to withdraw his government’s support from the IMF deal, maintaining the situation arising from ongoing floods could be used as a pretext to no longer honor the agreement. “You have signed Rs. 750 billion [surplus] commitment with the IMF,” Tarin says to Leghari. “You now need to tell them that the commitment you made was before the floods, and now [Punjab] has to spend a lot of funds for floods [rehabilitation],” he adds.

“You need to say now that we will not be able to honor our commitment,” Tarin continues, stressing this is all that needs to be said to place pressure on the incumbent government. Directing the Punjab finance minister, also a member of the PTI, to draft the letter and send it to him for final approval before sending it to the federal government, Tarin claims the PTI also plans send it to the IMF representative in Pakistan to further damage efforts to revive the much-needed bailout program.

During their conversation, Leghari asks Tarin—a former finance minister—if Punjab withdrawing from the deal could damage the state of Pakistan. “Well, frankly isn’t the state already suffering because of the way they are treating your chairman [Imran Khan] and everybody else?” Tarin responds, seemingly claiming that damaging the national economy is an acceptable cost. “[The] IMF will definitely ask them: where will you get the money from now?” he says, adding the party would not tolerate any more “mistreatment” from the center. “We cannot be blackmailed,” he adds, claiming the issue would be highlighted on social media in a manner that could not be traced back to the PTI.

The second leaked phone call, between Tarin and Khyber-Pakhtunkhwa Finance Minister Taimur Jhagra, concerns the former asking the latter if he has written the letter withdrawing his provincial government’s commitment from the IMF deal. “I have a previous letter … I will send it to you after drafting it,” Jhagra informs Tarin, who directs him to ensure he highlights the devastation caused by floods as the “primary reason” for reneging on his earlier commitment.

“First point would be that we need huge financial aid for restoration of infrastructure and rehabilitation of flood affectees,” says Tarin, adding he has issued similar instructions to Punjab’s finance minister.

“This is a blackmailing tactic … no one is going to leave any money [in surplus]; I’m definitely not leaving any money,” Jhagra tells Tarin, who says “if you’re not going to leave any money, we’ll make sure he [Punjab minister] doesn’t leave any either.” At one point, Tarin tells Jhagra a copy of the letter should also be sent to the IMF representative in Pakistan so “these [morons]” realize they can’t continue pressuring the PTI. Jhagra agrees, adding he knows the “number 2 of the IMF in Pakistan” and would convey the letter to him.

During their conversation, Tarin also suggests the plan to scuttle the IMF deal comes from the PTI leaders, including Chairman Imran Khan.

The KP government, last week, issued the letter allegedly being discussed by Jhagra and Tarin. There has been no similar movement from the Punjab government as yet.

The audios were leaked the day that the IMF’s Executive Board is to meet and consider Pakistan’s request to release a $1.2 billion tranche under the Extended Fund Facility. Finance Minister Miftah Ismail had, last week, slammed the KP government for writing the letter at this stage, saying this was a clear attempt to damage the national economy when it urgently needed the loan revived for macroeconomic stability.

Defending the leaked calls and Tarin’s demands of the Punjab and KP finance ministers, PTI Secretary General Asad Umar claimed the former finance minister had not said anything wrong. “He told both finance ministers to tell the federal government they should go back to the IMF and inform them that we have been hit by a flood and it is not a normal situation,” he said, adding it was “sensible” to seek concessions from the global lender in the prevailing calamity.

But while Umar appeared to suggest the calls were “manipulated,” PTI Senior Vice President Shireen Mazari differed in pointing the finger at the “illegal” wire-tapping of what she described as a legitimate conversation. “There is nothing illegal in the conversation and PTI position on IMF conditions [government] is agreeing to is public,” she wrote on Twitter. “What is criminal offense is illegal wiretap of phone—without court order. Supreme Court judgments exist,” she added.

While finance minister Ismail had already slammed the letter written by Jhagra last week, he reiterated his anger during a press conference on Monday, stressing the PTI appeared to believe Imran Khan was more important than the state of Pakistan. Stressing there was no PTI if there was no Pakistan, he emphasized the country’s stability was sacrosanct and no one would be allowed to endanger it.