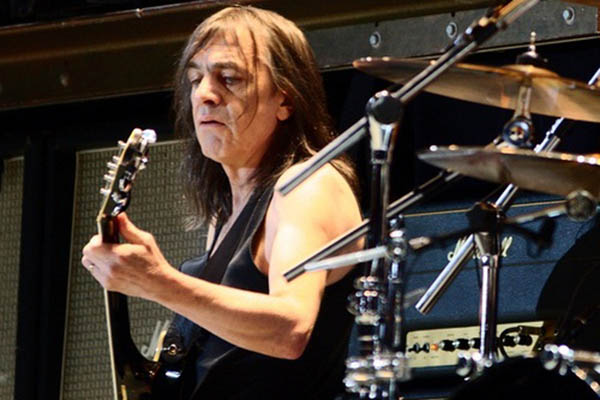 Unassuming and down-to-earth, Malcolm Young did not appear to embody the typical characteristics of a hard-rocking megastar guitarist. Yet when the Scottish-born Australian burst onto the world stage as part of the band AC/DC in the 1970s, Young kicked off an incredible era of music-making that saw him hailed as the world’s greatest rhythm guitarist.

Young was born in 1953 and spent his early years living in a housing estate in Glasgow before moving with his family to Australia aged 10. From early on, music was in the blood of the Youngs. George Young paved the way for younger brothers Malcolm and Angus when he shot to fame in the 1960s as a member of the popular Sydney-based The Easybeats.

The group went on to record 16 more albums, becoming became one of the world’s biggest-selling bands in history. They were inducted into the Rock ‘n’ Roll Hall of Fame in 2003 after a string of hits including “Dirty Deeds Done Dirt Cheap”, “Jailbreak” and “Highway to Hell.”

“There’s very few rock ‘n’ roll bands … There’s the [Rolling] Stones and us, and their sound is completely different to us,” Malcolm Young said in a Dutch television interview around 2000 of the band’s music. “So we really aim, you know, in an area that’s going back in time with the sounds, the old analog sounds. So we try to even keep that and the sounds are bigger than digital. Rock bands don’t really swing. Rock ‘n’ roll has a swing… the jungle of it all. It’s a feeling.”

The rockers were not without their troubles. Scott died in 1980 after a night of heavy drinking, while in 1988 Malcolm stepped aside briefly as he battled alcohol problems and was replaced by nephew Stevie Young.

Throughout the ups and downs, the guitarist was recognized as the driving force behind the band, even as Angus drew the limelight with his trademark schoolboy uniform and onstage flamboyance. “If AC/DC was a car, Malcolm was driving it,” Australian music industry icon Molly Meldrum told Melbourne’s Herald Sun. “He was always so ambitious. He and Angus kept that band going, Malcolm was the rock, even after the death of Bon Scott. But Malcolm was very quiet and shy, but also a lot of fun, especially on tour. Even after they’d become the most successful Australian band of all time Malcolm was still so humble.”

Young last performed with AC/DC in 2010 during the “Black Ice” tour, and retired from the band in 2014 aged 61 amid a battle with dementia that worsened until he could no longer remember his own songs. But he told the band to “keep making music” despite his struggles.

“And he just said to keep doing it. That’s the way he talked—[he was a] straight shooter. So we did, and it was great,” lead singer Brian Johnson said.

Young, 64, died on Saturday with his family by his bedside, AC/DC said in a statement. His peers in the rock world hailed his body of work, with Def Leppard frontman Joe Elliott calling him “an incredible guitar player & the glue for that band onstage & off.”

Heavy metal star Scott Ian of Anthrax, who has a tattoo of Young on his arm, wrote on Instagram of how the Australian’s “intensely powerful, percussive and economic style of playing” inspired his own career. “His uncanny ability to wring only the necessary notes out of his Gretsch was what made AC/DC—his riffs, feel and tone the soul of that band.”