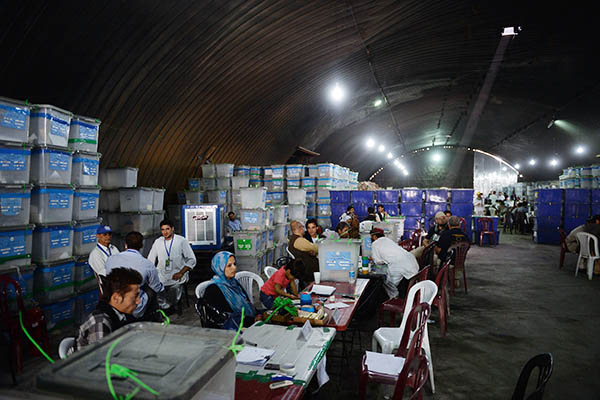 Credible vote audit could be completed by Sept. 10, according to the United Nations.

Afghanistan will not have a new president in time for a key NATO summit next week, officials said Thursday, as the country’s prolonged election crisis lurched toward another damaging delay.

The latest deadline of Sept. 2 was abandoned as a U.N.-supervised audit of all eight million ballots has fallen behind schedule, with both candidates still claiming victory in the fraud-tainted vote.

A NATO summit in Britain from Sept. 4-5 is meant to agree on future support for Afghanistan after the 13-year U.S.-led combat mission ends later this year. But NATO members had repeatedly stressed a new president should be in place before the summit to prove that the country is becoming a functioning state after receiving billions of dollars of military and civilian aid assistance.

The United Nations released a statement saying that its mission chief Jan Kubis had told outgoing President Hamid Karzai “that a rigorous and credible audit required time, but could be completed around Sept. 10.”

“Following all necessary steps, as required by law, the inauguration of the new president should then be possible soon after,” it said.

The U.S. had led a strong international effort to push for the next president to be inaugurated by Sept. 2 to allow him to attend the summit. Karzai, who has had a series of bitter spats with the U.S.-led military coalition, has confirmed that he will not go to Britain, though a senior minister may attend in his place.

NATO press officials in Kabul were not immediately available to comment on whether both Ashraf Ghani and Abdullah Abdullah, the two presidential candidates, could attend the event.

The summit was meant to showcase the signing of a security pact that would allow a U.S.-led NATO support mission in 2015 after all foreign combat troops depart by December. The disputed June 14 election has sparked fears that protests could spiral into ethnic violence—and even lead to a return of the fighting between warlords that ravaged Afghanistan during the 1992-1996 civil war.

Ethnic friction is a risk as Abdullah draws his support from Tajiks and other northern Afghan groups, while Ghani is backed by Pashtun tribes to the south and east.

The vote audit was part of a deal brokered by U.S. Secretary of State John Kerry in which the candidates also agreed that the winner would form a national unity government. Negotiations over the unity government have struggled, while officials deny reports that some current ministers planned to break the impasse by setting up an “interim administration” to take power.

With the Afghan government in paralysis for months, unrest has worsened nationwide this year with Taliban insurgents launching several major new offensives. Civilian casualties soared by 24 percent in the first half of 2014, according to recent U.N. figures.

Abdullah led Ghani after the first round of voting in April but preliminary results of the run-off showed Ghani ahead by over one million votes. Karzai, whose successor was first due to be inaugurated on Aug. 2, has already packed up his personal belongings and library of books, ready to leave the palace, his spokesman told AFP on Thursday.

He has stayed publicly neutral in the election and is constitutionally barred from standing for a third term in office after serving since the austere Taliban regime was ousted in 2001.

Abdullah, who claims he was cheated out of victory in the 2009 election by cheating in favor of Karzai, on Wednesday pulled out of the U.N. vote audit, saying it was failing to eliminate fraudulent ballots. U.N. deputy mission chief Nicholas Haysom described Abdullah’s withdrawal as “regrettable” but said the audit would continue.