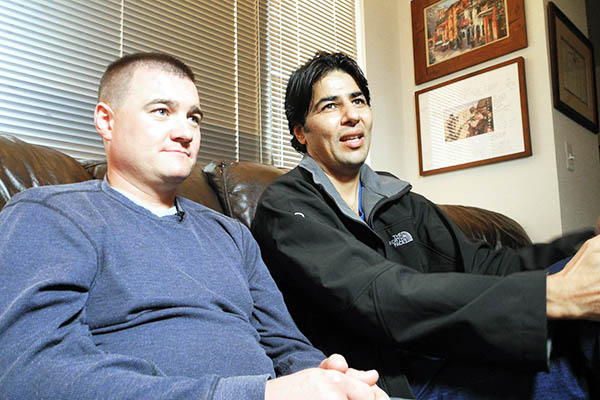 The Taliban have threatened to kill any Afghan who worked with U.S. forces.

[dropcap]A[/dropcap]fter a five-year wait, Mohammad Janis Shinwari is relieved to be in the United States, safe from the threats of the Taliban. But as a former interpreter for U.S. troops in Afghanistan, Shinwari fears for the lives of his colleagues back home, who are desperately trying to secure U.S. visas. “I am very worried for my friends. They have no protection,” said Shinwari. “Now I want the U.S. government to pay attention and work hard to get those other interpreters from Afghanistan to the United States. If they get caught by the Taliban, they are going to get killed.”

The 36-year-old Shinwari, along with his wife and two children, now lives in the Washington suburbs. He might never have secured a visa without the relentless efforts of a U.S. soldier, Matt Zeller—who is fiercely loyal to Shinwari because the Afghan came to his aid at a dire moment on the battlefield, gunning down two Taliban insurgents who were closing in for the kill. “I was pinned down and I thought, this is it, I am going to die on this hillside, probably by a Taliban bullet,” Zeller said. “He saved my life.”

Zeller hardly knew Shinwari, but after that life-saving moment, he became fast friends with the Afghan. At the end of Zeller’s tour, in December 2008, he promised Shinwari, whom he calls his “brother,” that he would get him and his family visas to live in the U.S. “I just didn’t think it would take five years,” said Zeller, sitting next to his former translator on a sofa in his apartment in northern Virginia.

When Shinwari’s visa application stalled, Zeller drummed up media coverage, contacted members of Congress, and organized an online petition that attracted tens of thousands of signatures. Shinwari had to submit to two lie-detector tests, and lawmakers made phone calls to senior government officials to break the logjam over his case. “I wasn’t going to resign him to getting beheaded in front of his family and tortured and killed,” said Zeller, now a captain in the Army reserves. “I couldn’t live with that.”

While the Army officer persuaded lawmakers and the media to focus on his interpreter’s plight, thousands of other interpreters who risked their lives for U.S. troops are still in peril, Zeller said. In Kabul, Ehsan, one of Shinwari’s colleagues, lives separately from his family to avoid putting them in danger.

With U.S. forces now withdrawing and conducting few patrols, Ehsan’s translation work has dried up and his application for a visa seems to be moving in slow motion, despite reference letters from Americans he worked with. “I moved my family to my father’s house. I don’t have any income, I don’t have any jobs,” Ehsan said from the Afghan capital. “If you don’t give me a job, why do you deny my visa?”

The threats to his life are very real, and delivered in person. “Somebody knocked at the door and my father answered. He yelled ‘who is that?’” he said. “‘We need to talk to Ehsan,’” the visitors said. “My father said, ‘He is not at home and he is not coming home.’ They said: ‘OK, tell him we will find you and we will cut [off] your head.’”

The U.S. State Department said it has worked to expedite special immigrant visas for Afghans and that the pace has picked up dramatically over the past year. “We are committed to helping those, who despite the risks, have helped us,” said Jarrett Blanc, deputy special representative for Afghanistan and Pakistan.

In the last U.S. fiscal year ending in September, nearly 1,600 Afghans, mainly interpreters, and their family members received U.S. visas, officials said. The number was the largest since the program started and “a tenfold increase” from the year before, said an official, who spoke on condition of anonymity.

In total, about 3,720 Afghans who worked for the U.S. government and their family members have received visas under a program approved by Congress in 2009. But Zeller and other advocates say there are thousands of interpreters who should qualify who remain stranded, and as NATO and U.S. forces scale back their presence, they face mounting dangers. He says the visas are slow in coming because no civil servant “wants to be the one who let in the next ‘terrorist.’”

Shinwari says he considers himself one of the lucky ones. Far from the dangers he faced in Afghanistan, Shinwari is organizing a new life for his family in America, looking for a job, signing his wife up for English lessons, and arranging schooling for his kids. “The important thing for me and family is we sleep good, we eat good, we go outside without any fear,” he said. “This is the biggest thing.”