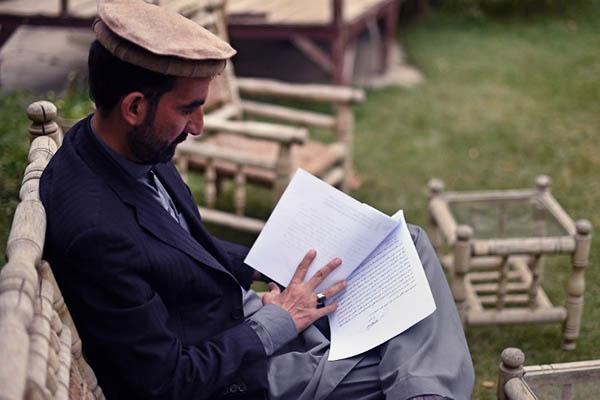 Both real and counterfeit ‘night letters’ are being used to gain asylum in European nations.

Stamped with the Taliban’s crossed sabers emblem, the threat letter in Ahmadzia Abbasi’s hand reads like a death warrant—but like many Afghans he sees the document as a ticket to a new life and asylum in Europe.

The Taliban widely use so-called “night letters” containing lurid threats of violence and death, often delivered by shadowy agents under the cover of darkness, as an effective tool of intimidation. Many war-weary Afghans embarking on perilous voyages to Europe carry the nocturnal missives—real and counterfeit—in an effort to build a compelling case for their refugee application.

“Anyone who reads this will know that my life is in grave danger,” said Abbasi, a 31-year-old social activist from eastern Logar province, holding up a night letter he found pinned to his front door in April.

The Pashto-language document, bearing the signature Taliban stamp, castigates him for supporting the “infidel government” and warns that his head will be cut off. He said the threat was prompted by his push to promote girls’ education in his village, which apparently angered the infamously misogynistic militant network.

“The letter is my best hope—my only hope—of gaining asylum,” he told AFP in Kabul. He has appealed for asylum to the European Union mission in Afghanistan, but the process is unlikely to be smooth as a record number of Afghans flee the turmoil and war convulsing their country.

Afghan officials say the country is witnessing an “unprecedented” migration toward European nations. Some 77,731 Afghans applied for asylum in Europe in the first six months of the year, more than three times the figure in the same period last year, and higher than all previous years since 2001, according to the U.N. refugee agency.

Afghans are the second largest group of migrants trying to make Europe their home, behind only Syrians.

While many face genuine threats, fabricated night letters are common, highlighting the lengths some Afghans are willing to go in order to attain asylum.

Heshmat, 24, bought his for $80 from a group of counterfeiters recommended by a friend who recently made it to Germany with a similar letter. He said he was unsure whether the network was linked directly to the Taliban but the forged night letter looks “very real.”

“The human smuggler who will take me to Sweden says: ‘Europe is now open to migrants—and a Taliban death threat can go a long way to demonstrate the need for asylum’,” Heshmat told AFP, requesting that his last name be withheld.

Smuggling networks are flourishing in Afghanistan, making money from tens of thousands of desperate migrants undertaking dangerous journeys on well-trodden Mediterranean trails via Iran, Turkey and Greece. Statistics suggesting the scale of fraudulent cases are hard to come by but Heather Barr, a researcher with Human Rights Watch, cautions against generalizing the trend.

“Even if some letters are fake, that does not mean that all are—and Human Rights Watch has documented what we are fully satisfied are genuine threat letters in some cases,” Barr told AFP. “It’s also worth remembering that the body count in Afghanistan is high and growing. I would ask anyone who argues that the threats are not real to explain why so many people who say they are under threat keep dying.”

Anecdotal evidence, however, suggests that Afghans—increasingly weary of surging Taliban violence and rising joblessness—are going to lengths to bolster their case for asylum. A Kabul printing press said it has fielded more and more enquiries about “Taliban rubber stamps,” possibly for fake night letters.

A hair salon in Kabul revealed recent requests from light-haired Afghans for darker, dyed hair to make them “appear Syrian”—the belief being that Syrians are being given priority for asylum.

Joining the snaking queues outside Kabul’s passport office—another testament to the accelerating exodus—some Afghans are seen waving night letters in desperate pleas to officials to expedite the process. “We can’t give passports to thousands of people in one day—nobody in the world can! Leave, just leave!” an official bluntly told the crowd one morning recently.

Abbasi says the prevalence of “fake night letters” was affecting his E.U. application. “It raises questions whether my threat is real,” he said, adding that his cousin, a government official, was recently shot dead after receiving a similar threat.

As the sun went down over Kabul, he scrambled to return to his village in Logar before nightfall—when security forces retreat to their barracks and the Taliban prowl the streets. No one can dispute that threat.