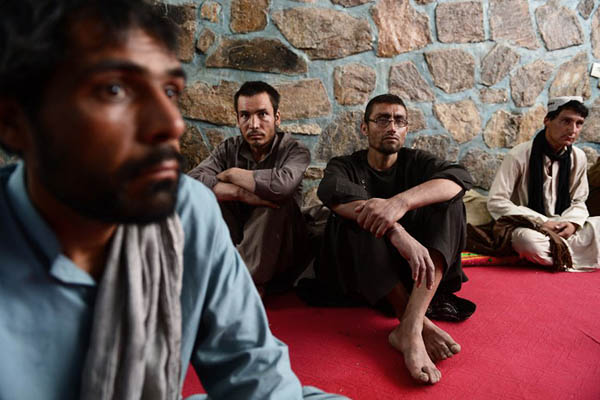 Employers encourage many laborers to get hooked on heroin to make them work longer hours.

At Zero Point, the main border crossing between Afghanistan and Iran, hundreds of Afghan laborers return to their homeland each day. Some are exhausted by grueling working conditions, but many others bear the hallmarks of heroin addiction they acquired while in Iran.

Under the watchful eyes of customs officials from both countries, the laborers cross the windy and arid plains at Islam Qala, the entry point to Herat province and western Afghanistan, after months or years spent working in Iran. Every day, between 1,000 and 1,500 illegal Afghan migrants, mainly young men, return to their country, either voluntarily or—in around a third of cases—because they have been expelled.

Iran, which shares a long border with Afghanistan, began taking in millions of Afghan refugees in the 1980s as they fled a war that began with the Soviet invasion and has continued to this day. The flow of people began to reverse following the fall of the Taliban regime at the end of 2001, with millions of Afghans choosing to return home. And the pace has picked up in the past few years due to an increasingly repressive environment for Afghan refugees in Iran, particularly the 1.7 million who are unregistered (a further 840,000 are legal).

Tehran has remained silent over criticism regarding the expulsion of illegal Afghans, earning it criticism from rights groups over the past few years.

Situated 120 kilometers from the border, Herat, welcomes the majority of those who have come back. But authorities have witnessed a disturbing trend: many of the returnees are addicted to drugs they first tried out while in Iran.

In an ironic twist, most of the drugs consumed are exported from Afghanistan, which produces 85 percent of the world’s opium, later refined into heroin. Production has increased seven percent over the past year thanks in part to an evergreen Taliban insurgency and lack of government control in remote areas, according to the United Nations Office on Drugs and Crime. A large portion of Afghanistan’s drugs are transported to the rest of the world via Iran, where dealers and users find them easy to obtain.

At a drug treatment center in Herat, Mohammad Choghok, 50, tells AFP that up until two years ago he lived in the Iranian town of Mashhad, where he worked as a shepherd. And his employer, instead of paying him, gave him opium. “I have been addicted for almost 34 years,” he murmurs.

According to Mohammed Reza Stanikzai, a senior narcotics official at the UNODC, initial research also backs the claim that “most [Afghan] drug users started their first drug use outside the country.”

“In many cases, their employers give them drugs and tell them: ‘If you take these you will work better and be better paid’,” says doctor Safiullah Pardis, the head of a clinic for addicts in Herat. Akbar Anwari, 28, was born in Iran to Afghan parents. It was there that he became an addict, before his deportation.

“My family lives in Iran, I don’t have any contact with him,” he said, explaining he wants to rid himself of his drug habit before seeing them.

As night falls, dozens of heroin users roam the parks in the center of Herat. Without a place to stay and money, some become delinquents and end up in prison. Of the 3,100 inmates in the city’s lock-up 430 are addicts. Fewer than half of these detained addicts are treated in a tiny clinic within the prison. Crowded into a dormitory with bunk beds, the shaven-headed detainees doze in the afternoon heat.

One of them, Mohammad Naeem, 23, recounts how he and friends “got hooked on drugs in Iran”. “Work was too hard, and I took drugs to stay on top. I was relaxed and working harder,” he said.

According to official data, 500 tons of drugs are consumed each year in Iran. It is a plague that Iran’s interior minister Abdolreza Rahmani Fazli told the ISNA news agency was due to his country “being located on a transit route” for drugs coming from Afghanistan.

Tehran says it has 1.3 million drug addicts out of a population of roughly 78 million, “a high number for us,” according to the minister, which is increasing by around 70 people per day.

In neighboring Afghanistan, meanwhile, the number of addicts has nearly doubled in the past decade, reaching three million or roughly 10 percent of the population. It is a trend that has caused alarm at the very highest levels of government. “This is a major threat to us because a drug addict can very easily become an insurgent,” President Ashraf Ghani said recently.