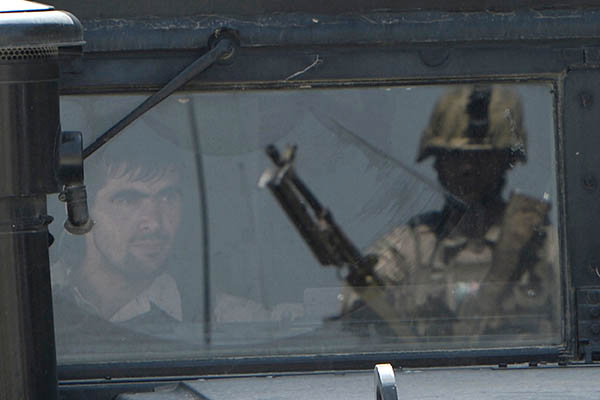 Four guards injured in ambush on convoy in Paktia province.

Dozens of armed insurgents attacked a convoy carrying a presidential security team in southeastern Afghanistan on Thursday, sparking a gun battle in which four guards were wounded, an official said.

The militants ambushed the convoy as it travelled through the volatile southeastern Paktia province ahead of a planned by President Hamid Karzai to Urgun district, where a devastating suicide attack killed 41 on Tuesday.

“The security team was traveling to Urgun district [in neighboring Paktika province] to prepare for the president’s visit there,” said top presidential spokesman Aimal Faizi. “When they were ambushed, they fought back and called in for air and ground support, that were quickly deployed repelling the assailants. Unfortunately four guards were injured in the fighting which lasted for some hours,” Faizi said.

The convoy pushed ahead despite the attack, Faizi added, facing two more ambushes by insurgents on the way, but reached its destination without sustaining any further casualties. A security source in the region said four vehicles of the president’s security convoy were also damaged by rocket fire.

The main highway connecting Kabul to Afghanistan’s southern regions is often the sight of insurgent ambushes. It was not clear how the insurgent ambush on Thursday had affected Hamid Karzai’s planned trip to the region, with Faizi insisting he will visit “soon.”

The attack in Urgun took place in a bustling market place and was one of the deadliest in the war-torn country for months.