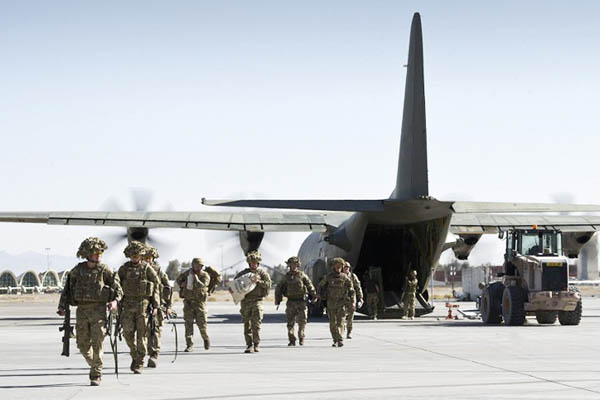 Insurgents thank militants for their ‘sacrifices,’ and urge Afghans to boycott pro-West government.

The Afghan Taliban on Tuesday claimed victory over Britain in southern Helmand province, crediting their fighters with killing hundreds and handicapping “tens of thousands” of troops in the “bloodiest attacks” of the 13-year war.

The last British combat troops in Afghanistan were airlifted out of Camp Bastion, a sprawling base located near the provincial capital Laskhar Gah on Monday, ending a mission that lasted longer than World War II and cost 453 lives.

Despite praise from politicians, including British leader David Cameron, the province remains a stronghold for Taliban militants whose government was ousted from power in a 2001 U.S.-led invasion, as well a hub for opium production.

In a statement posted to their website, the insurgents thanked Taliban fighters for their “immense sacrifices.”

“No doubt, the bloodiest attacks by mujahideen during the past 13 years, forced the invading enemy to leave. The official statistics by the enemy puts British casualties at 500 soldiers however the actual number of casualties is more than the official figures. These are the figures of life losses; the number of the handicapped soldiers reaches tens of thousands of troops.”

It also called upon Afghans to turn their backs on the government, which the militant claimed was working in the interests of Western powers. “The Islamic Emirate of Afghanistan calls on all those people who are fighting against their people as proxy of the invaders that they should use their sagacity. Do not fight in support of the enemy of Islam and the enemy of ours and your forefathers.”

The Taliban have intensified their attacks across the country in recent months as NATO combat forces, which once numbered 140,000, withdraw from Afghanistan by the end of the year. The U.S. military estimated this month that 7,000-9,000 Afghan police or troops have been killed or wounded so far this year.

Ghani has signed a deal with the United States and NATO to allow 12,500 foreign troops, including 9,800 Americans to stay behind in 2015 to carry out military training after the alliance’s combat mission ends.