Afghanistan to Double Special Forces in Fight Against Taliban 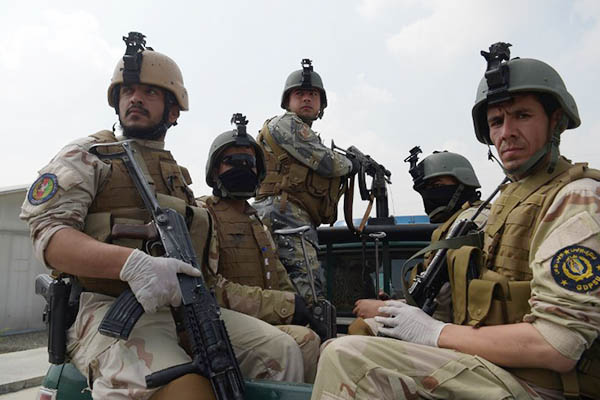 These new members of Afghanistan’s Special Operations Command (SOC) will soon be on the frontline of the war that U.S. President Donald Trump has vowed “to win” by putting more American boots on the ground indefinitely.

Camp Morehead, a former Soviet base near Kabul, is one of two training bases where the commandos are drilled by Afghan instructors in a program overseen by U.S.-led international forces. “We are hunters, you know. What I’m saying to you is we are killers, we are looking for the bad people to kick them in their arse,” one of the commandos, who cannot be identified, told reporters recently at the secondary training base.

While the SOC—which also includes top special forces—account for about seven percent of the Afghanistan National Defense and Security Forces, they have been deployed in nearly 80 percent of offensives and emerged victorious each time, they say—a claim supported by U.S. and foreign forces. But as the Taliban gain ground across the country and Islamic State group expands its footprint, there are concerns the fighters are becoming physically exhausted.

“It’s true they are tired. They are currently fighting on behalf of the world” against multiple militant groups, said General Dawlat Waziri, spokesman for the defense ministry. Earlier this year Afghan President Ashraf Ghani ordered a near doubling of their ranks from 17,000 as part of a four-year roadmap that also aims to strengthen Afghanistan’s air force.

“You better be in good condition. During the week of selection they had to run around with a 25-kilogram bag and return,” said an Afghan sergeant.

Since U.S.-led NATO troops ended their combat mission in December 2014, Afghan’s special forces and commandos have served as a bulwark against attacks launched by the Taliban and other Islamic militant groups. “The reason why they are so good is because they have been trained by some of the best special forces around the world,” said a U.S. general. “When the special forces are employed they never lose. If we double them that means a significant capability and we know the Taliban are concerned.”

The importance of their role in the 16-year war has grown as the embattled Afghan National Army (ANA) is plagued by killings and desertions. General John Nicholson, the top U.S. commander in Afghanistan, told reporters recently that additional American troops would enhance training of Afghan forces and expand Afghan air and special operations fighters.

“The Taliban cannot win on the battlefield,” Nicholson said, expressing confidence in Afghan security forces, even though they are still not ready to fight on their own. But for now the momentum is with the Taliban.

As of February only about 60 percent of Afghanistan’s 407 districts were reported to be under government control, according to the U.S. watchdog agency SIGAR. The rest is controlled or contested by the Taliban and other insurgents.

“As their [special operations forces] numbers increase, we will cover more of the country and we can conduct more missions,” said Colonel Ahmad Zabihullah, their operational commander.