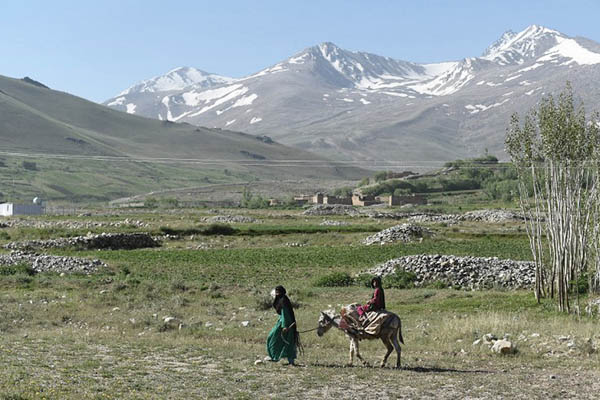 Afghanistan’s vast untapped natural resources, valued at more than $1 trillion, are seen as the war-battered country’s ticket to a self-reliant future, a possible trump card that could jumpstart the lagging economy as foreign aid ebbs.

But the lucrative sector—already plagued by rampant corruption, insurgent violence and a lack of regulation which are all deterring international miners—also threatens to fuel conflict and push Afghanistan deeper into turmoil.

“We are sitting on a fortune which could create cars and planes for the world, and jobs and schools for local people,” said Mohammad Reza, 53, twirling his prayer beads. “But this treasure could fall in the wrong hands if militants start infiltrating into Hajigak,” added the father-of-six, sitting among robed and turbaned farmers in the library of the seminary.

Hajigak, a patchwork of boulder-strewn ridges and wildflower meadows in central Bamiyan province, sits atop an estimated 1.8 billion tons of iron-ore—one of the world’s biggest such untapped deposits.

Barring occasional incursions by armed nomadic tribesman, this remote region dominated by minority ethnic Hazaras enjoys relative tranquility despite being hemmed in by insurgency-wracked provinces. But mining in the area, farmers fear, would inevitably enflame violence that has engulfed other areas of Afghanistan endowed with mineral wealth.

Insurgents, warlords and militias have made murderous incursions into most other areas rich in deposits of iron, gold, copper and precious stones, including the eastern provinces of Logar and Ghazni and the northern badlands of Badakhshan. At least 1,200 of Hajigak’s farmers, many of them mujahideen fighters during the civil war in the 1990s, have volunteered to mobilize a militia as a bulwark against intruders and illegal excavators.

Informal militias against a 14-year Taliban insurgency are becoming increasingly common across rural Afghanistan, although those dedicated to protection of mining sites are rare. Their emergence, without any official sanction or oversight, is a potential powder keg in the already strife-torn country.

“Afghanistan is on a resource curse trajectory,” Javed Noorani, an independent Kabul-based researcher on mining, told AFP. “There is a real danger that the political conflict could morph into a resource conflict.”

Noorani cites a proliferation of criminal syndicates facilitating the cross-border movement of illegally mined gemstones and other resources, including the country’s biggest cash crop opium—often in cahoots with insurgents who charge “protection money.”

“This shadow economy is expanding the war chests of militant groups and fuelling the conflict,” he said.

But the biggest mining projects worth billions of dollars are mired in delays due to security risks and a lack of technical capacity.

An Indian consortium and a Canadian company that won rights to develop the Hajigak mines in 2011 are yet to begin work at the site. The other big stalled project is the Mes Aynak copper mine southeast of Kabul, which was awarded to the state-owned Metallurgical Corporation of China in 2007.

The discovery of Buddhist ruins and artifacts at the site have contributed to the delay.

Overall, a woeful lack of infrastructure, including a well-stretched railroad network linked to ports in Iran and Pakistan, have made mining projects less economically viable, analysts say.

The Afghan government “lacks the technical capacity to research, award and manage new [mining] contracts without external support,” the Special Inspector General for Afghanistan Reconstruction (SIGAR) said in a scathing report in April. The U.S. watchdog added that a nearly $500 million grant from Washington to develop a self-sustaining Afghan mining industry had failed.

Meanwhile, in Hajigak the inordinate delay in getting the mining project off the ground has left villagers seething with frustration.

Potato harvests, the local mainstay, depend on the brutal vagaries of the weather. Mining could offer more steady incomes in a region that is cut off by snow for nearly seven months of the year.

At the madrassah, replete with pictures of spiritual saints gazing down from the walls, Nowroz Ali Saifyar described the scourge of joblessness as a ticking time bomb. “Look around you—even young university graduates are jobless,” said Saifyar, an elderly former mujahideen leading the effort to mobilize the militia. “We want to tell mining companies: we will protect you with our lives if you start this project. Help us put bread on our table all year round.”