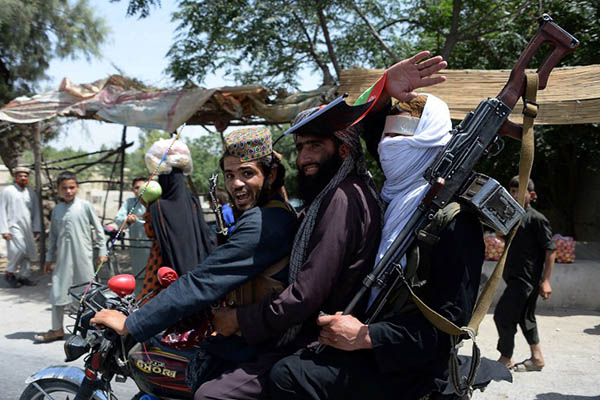 Extraordinary scenes of Afghan Taliban and security forces spontaneously celebrating a historic ceasefire showed many fighters on both sides are fed up with fighting, analysts say, raising hopes for peace in a country ravaged by war.

The jubilant response to the first truce between the Afghan government and the Taliban over the Eid holiday took many by surprise, although observers warn that an end to the nearly 17-year conflict is still a long way off.

“It is difficult to predict what the next move might be, but the spell has been broken,” Afghan political analyst Ghulam Sakhi Ehsani told AFP. “From all the photos and videos, it seems the foot soldiers from both sides are tired of war.”

In scenes unimaginable only a few days ago, Taliban fighters and security forces long locked in a seemingly intractable conflict were seen hugging and taking selfies together around the country. Civilians, who have borne the brunt of the bloody war, also flocked to greet the insurgents as they entered urban areas that they usually visit only to attack, including the capital Kabul.

Fighters on both sides of the conflict expressed hopes for the unprecedented ceasefire to continue. “We have held the ceasefire well so far,” Taliban commander Baba told AFP during celebrations in the eastern province of Nangarhar on Saturday. “Everyone is tired of war and if our leaders order us to continue the ceasefire, we will hold it forever,” he said.

But the sight of its fighters openly mingling with security forces and civilians appeared to alarm the Taliban’s leaders, who ordered their men back to their posts.

Michael Kugelman, an analyst at the Wilson Center in Washington, D.C., said the Taliban leadership might have feared that “more days without fighting could convince the rank and file that peace is better than a war.”

“A little bit of freedom is good but too much, why go to paradise,” a Western diplomat told AFP, referring to the virgin angels the Muslim holy book, the Quran, says await good Muslims, especially martyrs, when they die.

Two suicide attacks in Nangarhar, both claimed by the Islamic State group—which was not part of the ceasefire—marred the otherwise peaceful Eid holiday that follows the holy month of Ramzan. But the fact that the truce held and was welcomed on both sides suggested the “dynamics of this conflict may have changed,” Afghanistan Analysts Network co-director Kate Clark told AFP. “Once there’s a recognition of common humanity, that everyone is Muslim, that people in the cities were celebrating Eid as in the villages, that it’s really nice to have an ice cream with someone, hopefully it becomes more difficult to kill them,” she said.

Kugelman said the ceasefire had provided “a major building block” for the government’s efforts to negotiate a peace deal with the Taliban, which have so far failed. “While reconciliation still feels like a remote prospect, it now feels at least a bit more of a possibility,” he said.

Initial euphoria over the ceasefire quickly turned to disappointment and anger among many Afghans when the Taliban resumed fighting on Monday. While analysts had expected the Taliban to return to the battlefield, some people saw it as a betrayal.

“Death to the Taliban and their backers. Once again they have shown that they love shedding the blood of innocent Afghans,” Madena Momad posted on Facebook.

What comes next in the long conflict is unclear.

There has long been secret back-channel dialogue between interlocutors on both sides of the war, and direct talks between Kabul and the Taliban were held in Pakistan in July 2015, but were quickly derailed.

Analysts say even if the Taliban could be convinced to give formal talks another try—they now refuse to negotiate with the Afghan government, which they see as illegitimate—it could still take years to reach and then implement an agreement. There is no roadmap and neither side appears to be clear on what a post-conflict Afghanistan would actually look like or has identified their “red lines” in talks.

President Ashraf Ghani announced over the weekend that the government’s eight-day ceasefire, due to expire on Tuesday, would be prolonged for another 10 days. But while Taliban leaders hailed the three-day truce a success and a demonstration of their “full control” over their fighters, they refused Ghani’s request for an extension.

The government’s move may buy the president more time to work out how to keep the momentum going. “Ghani’s only option is to keep trying for peace,” Kugelman said. “The war can’t be won militarily so he’ll need to make any and all possible efforts to secure some type of negotiated end to the war.”

Ghani’s February offer of peace talks with the Taliban, considered to be one of the most comprehensive plans ever offered by an Afghan government, was ignored by the militants, which went on to launch their annual spring offensive.

The insurgents have repeatedly demanded direct dialogue with the United States, which Washington has refused, and the withdrawal of foreign troops. But last month the Pentagon said that senior Taliban officials have been secretly negotiating with Afghan officials on a possible ceasefire. “This weekend was a very strong indication that if the pieces fall together in the right way there can be a constructive dialogue,” another Western diplomat said.