Home Latest News After Istanbul Attack, Will Turkey Take on the Islamic State?

After Istanbul Attack, Will Turkey Take on the Islamic State? 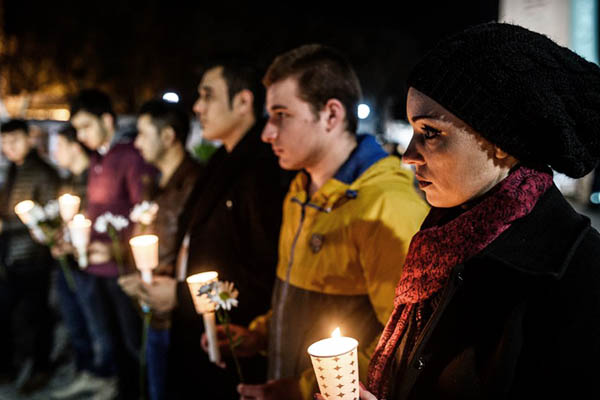 Analysts predict Ankara will ramp up efforts to eradicate the extremist group after recent rise in attacks.

Turkey has long been accused of tolerating and even collaborating with Islamic State extremists but in recent months it has shown signs of sharply toughening its line against the group. Now, after the suicide attack in Istanbul on Tuesday that killed 10 German tourists and was carried out by an Islamic State bomber from Syria, will Ankara launch an all-out assault against the group to push it out of Turkey and end its presence on the Syrian border?

Turkish officials vehemently deny there has ever been any collaboration with the extremists, saying Ankara has listed Islamic State as a terror organization ever since it has first emerged. President Recep Tayyip Erdogan has repeatedly said the group has nothing to do with Islam.

But analysts and diplomats say that at the start of Syria’s nearly five-year civil war, Turkey was actively looking for Islamist rebel allies in Syria to further its aim of toppling President Bashar al-Assad. Reports accused Turkey of becoming a conduit for financial support to jihadists, turning a blind eye to their entry into Syria and even supplying weapons.

Yet following a string of deadly attacks by Islamic State inside Turkey in 2015, including a double suicide bombing in Ankara that killed 103 people, Turkey stepped up arrests of jihadists who had built cells inside the country. Security forces moved to seal Turkey’s long and porous border with Syria, frequently nabbing and deporting foreign extremists who tried to slip across.

“It would be wrong to say Turkey is taking no action against I.S.,” said jihadism expert Aymenn Tamimi from the Middle East Forum. “Border security has been tightened, arrests on domestic I.S. support networks have occurred, and Turkey is pursuing a strategy to try to drive I.S. out of the remaining northern border areas in Syria.”

Turkish Interior Minister Efkan Alan said Wednesday that a week before the Istanbul attack, 220 people identified as members of the group were detained. In the last two days alone, Turkey has arrested at least 74 I.S. suspects.

Analysts note out that unlike other high-profile attacks staged by the group, I.S. has never claimed formally any strikes in Turkey, possibly in the hope of not further provoking the government into action against it in Syria. The Istanbul attack was markedly different from the three previous deadly bombings blamed on the group in Turkey last year, in that it did not target pro-Kurdish groups but tourists who make a substantial contribution to the Turkish economy.

“There is a likelihood that we will see more attacks in urban centers,” said Anthony Skinner, director of U.K.-based political risk consultancy Verisk Maplecroft.

Islamic State supporters have in recent weeks stepped up their rhetoric against Turkey, with ominous warnings to Erdogan appearing in the group’s Turkish-language propaganda “magazine” Konstantiniyye. “If Tuesday’s attack was perpetrated by the Islamic State, it would reflect a shift in the group’s strategy and herald a broader campaign against Turkey,” said Firas Abi Ali, senior analyst at IHS Country Risk.

He said I.S. had a “significant logistics and support base network in Turkey” and consequently “most likely has the capability to launch an extended terrorist campaign inside Turkey.”

Tamimi said “there is much greater hostility between the two actors now,” with Turkey already moving to push jihadists out of the border area that they once controlled with little challenge. “The most immediate solution is that I.S. needs to be driven out of the remaining border areas,” he said.

Despite occasional press speculation that an offensive was in the offing, Turkey has not launched any ground operation against I.S. although it is assisting the U.S.-led air campaign against the group. This contrasts with its relentless offensive against the outlawed Kurdistan Workers’ Party since July, which has seen air and ground operations not just in Turkey but northern Iraq.

In his first reaction to the Istanbul attack, Erdogan unequivocally condemned the bombing but then conspicuously spoke at greater length against the PKK. “From a security perspective, Ankara’s priority would be to fight the PKK,” said Skinner.

“The government is trying to significantly erode the PKK to such an extent that the cards will be in favor of the government in negotiations” for a final peace deal with the Kurdish rebels.