After President’s Plane Is Diverted, Bolivia Complains to U.N. 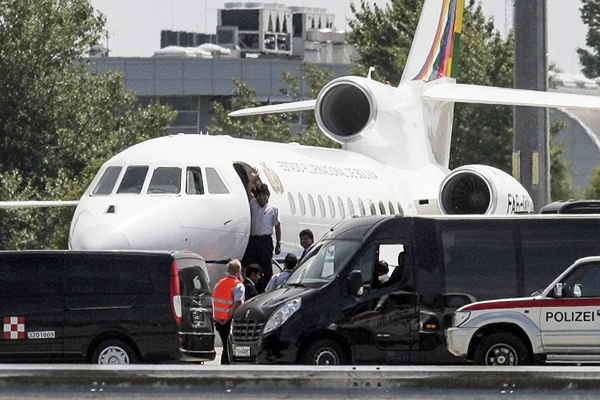 European countries closed airspace to jet suspecting leaker Snowden may be aboard.

Bolivia lodged a complaint with the United Nations on Wednesday and planned filing another with the U.N. Human Rights Commission against several European countries that closed their airspace to the plane carrying President Evo Morales.

Bolivia said Morales was flying from Moscow back to Bolivia when his plane was forced to land in Vienna on suspicion that fugitive U.S. leaker Edward Snowden may be on board.

The flight had originally taken off late Tuesday from Moscow, where 30-year-old Snowden has been holed up for days, just hours after Morales said his country would consider giving him political asylum.

While in flight, Bolivia said the pilot learned Portugal refused to allow the plane to land for refueling, and then France, Italy, and Spain banned the plane from entering its airspace.

On the ground in Vienna, police searched the plane and found no sign of the U.S. fugitive, and the European countries reauthorized the use of their airspace.

The diversion has sparked outrage from other Latin American leaders, with Argentine President Cristina Kirchner calling the incident “very humiliating.”

In a series of tweets on her official account, the president said, “they are definitely all crazy. The head of state and his plane have total immunity.”

Kirchner said she had spoken to Uruguayan President Jose Mujica, who was equally outraged.

And Organization of American States chief Jose Miguel Insulza demanded an explanation about the incident, which he said endangered the president’s life.

“Nothing justifies such a disrespectful act toward a country’s highest authority.”