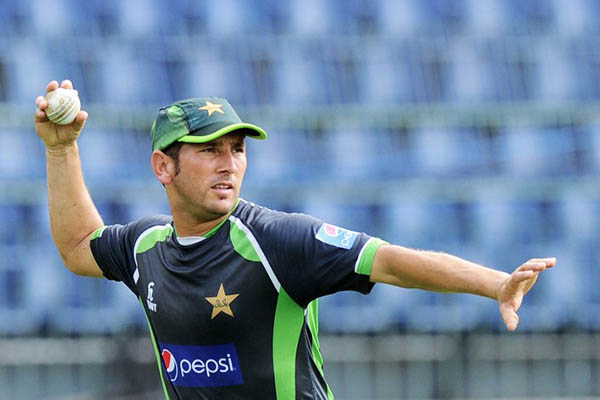 Leg-spinner says he learnt a lot from Australian Shane Warne during Test series against England.

Fast-rising leg-spinner Yasir Shah on Saturday vowed to keep his aggressive style intact after spinning Pakistan to a 2-0 series win over England this week.

Shah captured seven wickets to help Pakistan win the third and final Test in Sharjah on Thursday—taking 15 wickets in two matches to grab the man of the series award.

The stocky bowler from Khyber-Pakhtunkhwa province has been the linchpin of the team’s attack since Saeed Ajmal was sidelined for a suspect bowling action last year. He took 12 wickets to help Pakistan win 2-0 against Australia in the United Arab Emirates last year—their first series win over the Aussies in 20 years. Shah then took 24 wickets as Pakistan beat Sri Lanka 2-1 earlier this year, completing 50 wickets in only his ninth Test.

“I am by nature aggressive and attacking in my bowling,” he said. “I need rhythm and it comes with being aggressive in my stride. When I got slow I lost control and ended up bowling short and loose. So I try to attack but I am trying hard to be patient but being attacking is my strength.”

Shah said he learnt a lot from former Australian great Shane Warne, who visited Pakistan in the nets before the decisive Sharjah Test. “I am presently focusing on my strength and want to keep it simple. I just want to make sure that I keep my head up and hit my target bowling wicket to wicket. There are many things I have learnt from Warne but I need to take some time and practice but I will make sure that I won’t get distracted and keep my natural style.”

Shah said he was disappointed to miss the drawn first Test against England in Abu Dhabi with a back injury. “I still feel bad for missing the game because of an unfortunate back injury,” he admitted. “The game was really important for me. I know everyone is expecting a lot from me and had I played it this 2-0 scoreline could have been different. My team management expect a lot—in fact, our planning centered on me from Abu Dhabi. I know I am not able to deliver sometimes as needed but the kind of support my team management gives me actually drives me and keeps me motivated.”

Shah hopes his wicket tally keeps on increasing with the four-match one-day series set to begin on Nov. 11 and a Test series to come in England next year.

“The pitches in Sri Lanka were good giving much bounce but here in U.A.E. pitches are slow and I was getting much kick on the surface but still I tried my best to bring out whatever I got,” he added. “The only difference is that I missed the Abu Dhabi Test so the wickets could have been more.”

Shah has been named in the one-day squad to face England, with the first match to be played in Abu Dhabi on Wednesday.